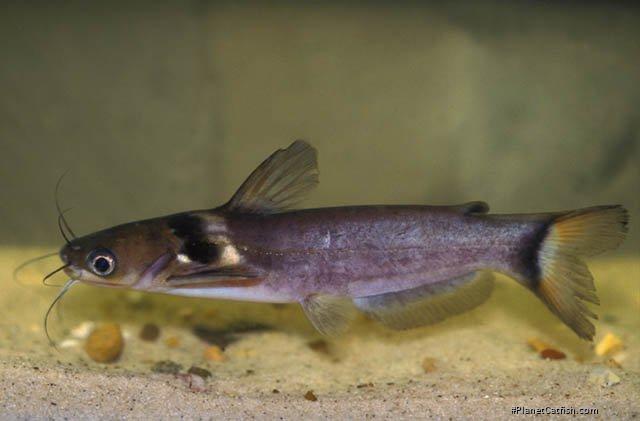 Not much is known about this catfish, outside of scientific literature this fish currently appears in but one hobbyist publication (Ornamental Aquarium Fish of India). There a picture can be found and little else. The book describes the fish as one that prefers shoaling, but although this behaviour is strongly exhibited in young specimens of the other species in the genus I did not notice this behaviour when selecting the two fish you see pictured here.

The other species in the genus Horabagrus is H. brachysoma (Golden Red-Tailed Catfish). It is being commercially farmed and perhaps it will not be long before the same is true of the black collared species. While we are discussing the two, the fish are very similar in terms of shape but their colouration happily gives the aquarist ways to distinguish between them. In H. nigricollaris, the black collar stripe extends from mid-body around to the top of the fishes head and the fish is generally darker all over. In the more golden coloured H. brachysoma the black marking remains a distinct spot on each side of the fish; a dorsal fin spot is also present. The image below shows the black collar marking nicely.

To my view this the black collared cat is the more attractive of the two but this argument really boils down to taste. For me, H. nigricollaris is a sleeker, more elegant fish with a subtle yet striking mother-of-pearl stripe just behind the leading black one. All its fins are works of art and the tail fin is a resplendent flame colour in well-conditioned fish. H. brachysoma is more striking certainly, but there is more to beauty than instant appeal.

Horabagrus has been considered as a member of the Schilbeidae cat family; it is not quite what you would expect from a bagrid. Interestingly it not only appears a morphological halfway house but also shares behavioural characteristics from both families. Certainly they are more sociable than many other bagrids of a similar or larger size. I have noticed the fish "blinking", a trick most commonly associated with Corydoras catfish and not something I had previously noticed in other bagrids.

It's a great beginner's catfish. Although the asking price may seem high for someone not used to hardcore catfish collecting, it truly is a real low-risk purchase. The fish are hardy and certain to give years of pleasure if kept properly. Given, you won't see the fish much in a well-laid out tank, but what an event when you do!