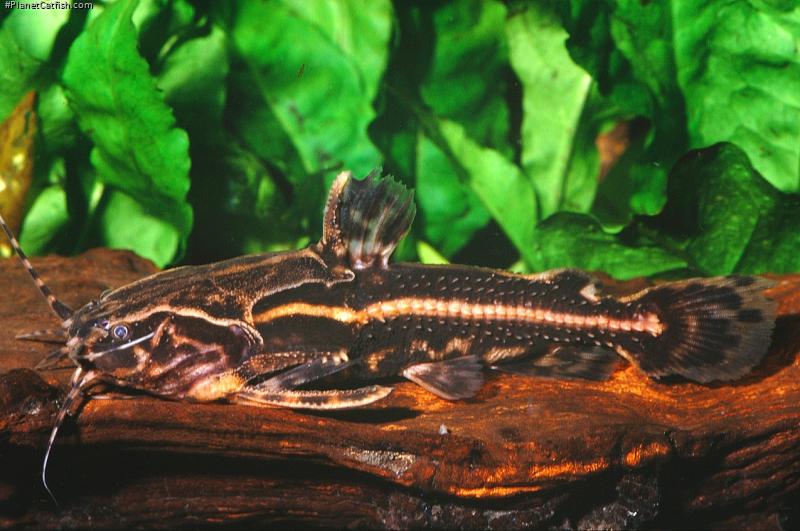 Acanthodoras cataphractus is very popular amongst a number of catfish enthusiasts myself included. Unfortunately A. cataphractus is not commonly available to the hobbyist, but is sometimes imported amongst other representatives of the family Doradidae. When this fascinating catfish is available expect to pay £10-£12 for an adult fish. In their natural habitat these catfish are said to be abundant in the calm waters of swamps and mangroves. These catfish are most active at night preferring to take refuge during the day.

The species certainly is not as bad on the eye as some talking cats, its base colour of the body and head is chocolate brown (hence the common name of Chocolate Talking Catfish) overlaid with some almost creamy orange markings almost forming a stripe which leads from the head into the lateral line and body scutes; whilst giving some blotchy markings over the rest of the body which are mainly on the ventrolateral region of the body. The fin spines are coloured as are the fins themselves.

As with all the other doradids that I have had the pleasure to keep over the years, I've found this species to be omnivorous and readily accepts a mixed and varied diet which they search through the substrate for. I personally feed all of my doradids on sinking catfish pellets, good quality flake foods, granular foods, cultured whiteworm, earthworms, aquatic snails which they relish and frozen foods such as bloodworm to name but a few.

I would suggest a minimum size of 36" x 15" X 12" for a shoal of these fascinating catfish. The preferred substrate for keeping these catfish should be good quality aquarium sand such as BD Aquarium Sand, or very smooth rounded gravel in order to prevent their barbels from being damaged. The aquarium should provide some shelter in the form of rocks, bogwood and aquatic plants. As with all other species of fish, water quality and general husbandry is very important, and I would recommend that a minimum of 25% water is changed on a fortnightly basis.

Wherever possible I would recommend that the aquarist keep these catfish in small groups of four to six specimens, assuming that they are available in these numbers; failing this they are quite happy to shoal with other members of the family Doradidae.