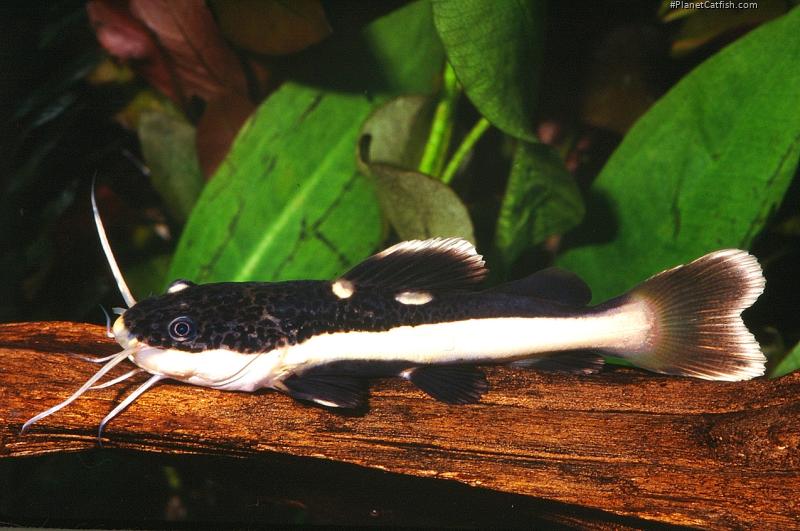 With the exception of the Zebra Pleco (Hypancistrus zebra), South Americas Red Tail Catfish must surely be the most written about single species of catfish. There are books, clubs and even a CD-ROM devoted to this one species. Strange for a fish whose husbandry is beyond all but the most serious, dedicated and responsible aquarist.

What is the Red tails appeal? On the face of it: size matters. This fish is about the biggest commonly available fish that an aquarist could house. Status - we are talking about the fish commonly referred to as "the emperor of the Amazon". They have a beautiful colour pattern which, unusually, gets better with age and they have character to match. Once settled Red tails will react to their owners presence and can be taught to hand feed. As babies, or "kittens" as they are affectionately known, these fish are terribly cute and thus very saleable. They have exactly the same appeal as real kittens or puppies; and the same, if not more responsibility. To timely quote a keeper of this fish, "A red tail is for life, not just for Christmas".

Here's a simple bit of economics to make you think: Wild caught fish are imported by air in boxes, with the exception of very rare or fragile species, the more fish in the box, the cheaper the fish. When they first appeared for sale, red tails were sold as larger sub-adults commanding a high-price. Today, red tails are imported in boxes of around 50 "kittens" usually smaller than 2". If you were to import, say foot long, juveniles you would only be able to fit two in the box and thus their sale price would have to be disproportionately higher than their size to make as much money as the box of "kittens". Further, take into account that the 2" specimens will reach a foot in length in about six months anyway; There is simply no commercial sense in importing larger fish. Thus it can be surmised that every red tail you see for sale larger than 2" in a shop is the product of someone careless enough to purchase a "kitten" only to have it grow beyond their ability to look after it.

An adult red tail will require at least a 8 foot long tank which should be a minimum of 30" front to back (width) to allow the fish to turn properly. Although the fish are commonly found in deep water pools in the wild, they don't seem to require such a water depth in captivity and minimal substrate (undergravel filtration is not a good idea for these fish due to their ability to move large amounts of the filter area if they take the notion) means that even a tank 18" tall will suffice. Taller tanks will allow the fish to more clearly signal when they are hungry as they start "prowling" around the surface when their stomach rumbles and give you more room for manoeuvre with water changing regimes. Adult red tails only require feeding approximately weekly and even this is a luxury compared to their wild feeding habits.

Rearing "kittens" is all too easy, they will eat all foods and grow to 12" or so in a "normal" sized aquarium, almost as you watch. A 48x18x18" aquarium is ideal for this purpose. But you must have larger accommodation ready, these fish need it. Often when moved to such aquaria or after too heavy a water change these fish shed their skin which can be seen floating around in large translucent lumps of mucus. At these times the fish may also stop eating and care should be taken not to over feed - it takes a long, long time for a healthy red tail to starve, so take it easy and let the fish adjust to the tank and the tanks filter adjust to its increased workload!

So then, a fish for the dedicated aquarist, a lifetimes's challenge, but worthwhile in that your efforts are rewarded by a tame pet that will react with you and share 25 years or more of your life. If there is even the slightest doubt in your mind about that large aquarium to handle a 2 foot+ monster for that length of time, go buy a shoal of Pimelodus pictus and enjoy this family of fish at a more responsible level.