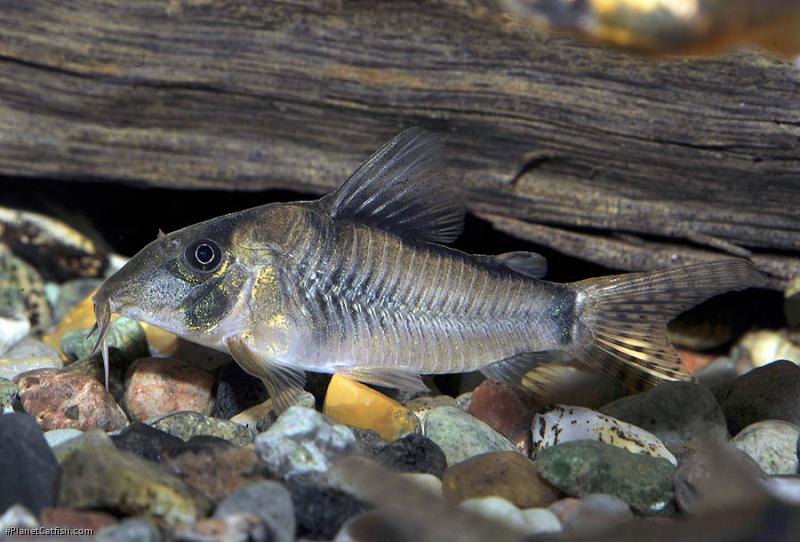 Once more we have a featured Corydoras and, more importantly, once more it is introduced to us by cory guru, Ian Fuller. My thanks to Ian for the article this month as it allows me to concentrate on writing other things such as Grooms wedding speeches.... I digress, back to the fish, Ian?

Corydoras simulatus is a long snouted species, growing to around 70 millimetres often referred to as saddle snouted because of its concave snout shape. It was given its name because of the similarity of its colour pattern to the smaller rounded nose species Corydoras metae Eigenmann, 1914. Both species come from the Rio Meta in the Meta province of Colombia. Corydoras simulatus also display variability in its colour pattern, with two distinct colour forms known, which are often present within single populations. The classic pattern shows a plain tan coloured body with a narrow black band extending from the base of the dorsal fin along the ridge of the back and down across the caudal peduncle. The colour pattern of the less frequently seen variants show an additional dark, often intense, black triangular blotch along the centre of the body. Both variants also have a black vertical eye mask.

Corydoras simulatus is an undemanding species and will tolerate a wide range of water conditions, however extremes should be avoided and any changes made should be gradual, with the exception of temperature when attempts to trigger spawning activity are made. The typical temperature drop made during water changes will often induce spawning activity; in fact this is one of the few long nosed species that has been successfully bred under aquarium conditions on a fairly regular basis. The species is best kept in a tank having a fine sand substrate in which it will often be seen burying head first, almost up to its eyes in its search for food particles. Other tank furnishings are a matter of personal taste, but the addition of some live plants, bog wood and a little leaf litter and will afford the fish with more natural surroundings.

The dietary requirements of this species are typical for the genus and in nature would consist of small insect larvae, crustaceans, worms and micro organisms found in the bio-film, which forms on submerged rocks, tree roots and fallen branches. In aquaria they will accept most commercially prepared flake, tablet and granular foods, However to keep them in the best of health their diet should be varied and where possible include live offerings such as Daphnia, blood worm, tubifex and chopped earth worms.