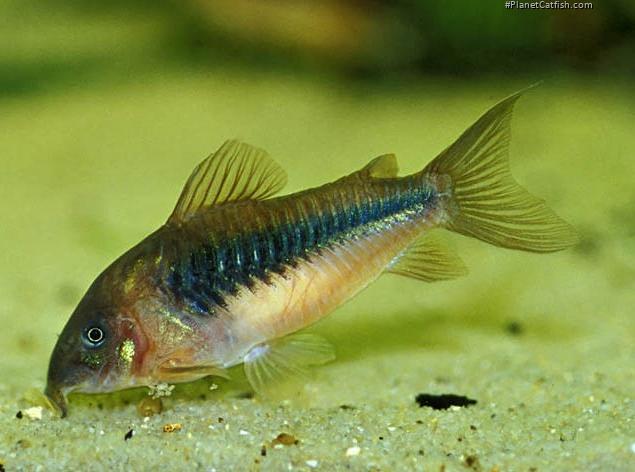 Undoubtably the best selling, most commonly kept catfish of all time, I figured it was about time to devote a catfish of the month slot to the Bronze Cory, Corydoras aeneus. What some people don't realize is that this catfish is also the albino catfish you are likely to encounter at your local aquatic shop. It is certainly the most common albino form of any Corydoras species. To illustrate this, above and below you will find images of the "regular", farm bred Bronze Cory and its equally domesticated albino. These are perfect community fish; their, at once, both comical and peaceful demeanor coupled with real hardiness ensures that they deservedly maintain their commonplace status in every dealer's "bread and butter" stock list. 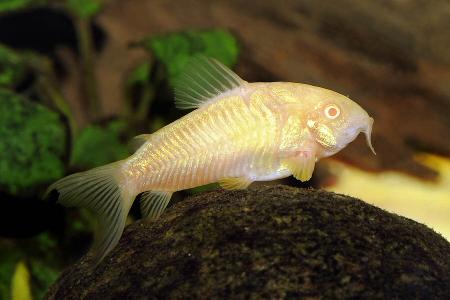 Yet the Bronze Cory has many more than two commonly worn robes. Recent and not-so-recent imports from from wild populations of this fish have given rise to a large number of colour and / or geographic forms and, perhaps, even distinct species. Currently, the notion that C. venezuelanus is a full species is gaining acceptance (at the time of writing, we accept it as such on this website) and maybe it is only a matter of time before we look again towards the formal resurrection of C. schultzei or the introduction of new species.

C. schultzei can be found in older (but not too old) aquarium literature, probably the best example being a black and white photograph in Dr. Sterba's Aquarium Handbook. The edition I'm looking at is in English and was published in 1973. Going back a decade to, for example, the 1961 edition of Axelrod and Vorderwinkler's Encyclopedia of Tropical Fishes (with special emphasis on techniques of breeding - retailing then at $7.95, that's around a cent a page - I could go on at length about this book which was a gift from my fishkeeping Dentist when HE retired!). I digress hugely; as I was saying, there is no mention of C. schultzei in this earlier offering and the pictures (albeit understandably black and white) are identical to the one topmost on this page. Although C. schultzei (named in honour of Mr. Otto Schultze) was described in 1940, the material has since been lost. Perhaps one of the more subtle tragedies of war? The end result is we have no point of reference to refer to except the original papers. This is a real obstacle to those who would seek to formally resurrect the full species status of this name. The more obscure synonyms, C. macrosteus (meaning long-bone and described from Sao Paulo in Brazil) and C. microps (meaning small eye and from Mato Grosso, Brazil) will likely continue to remain as such short of proper redesriptions. Even with the re-acceptance of C. venezuelanus and possibly C. schultzei as valid species, there still remains a great deal of variety indeed amongst the dispersed ranks of Corydoras. Presented below are the many faces of Corydoras aeneus (and a selection of similar species)...

It is the closeness of these fishes to that of C. aeneus that primarily associates them with that species. Most would agree that they are all one species but it's also very possible that none of them are the real C. aeneusat all! It was described from Trinidad, an island around 12 miles off the North eastern shores of Venezuela. Trinidad has been an island for hundreds of thousands of years. There are hundreds of species endemic to this island - why should C. aeneus be different? If its range is so restricted then that brings us to the question; why should we call any of the fish in the hobby C. aeneus? To my mind the answer to this is that the original Bronze Cory, certainly those used to stock the first mass breeding ponds in Florida, like other popular tropical fish of the time, came from Trinidad.

This is not gospel; some authors believe the much talked about stripe exhibited by many of these varieties fades with captive breeding. One does not breed Corydoras for colour in the way you would fancy guppies. Fifty years of continual captive breeding, and the fish we commonly find for sale has just lost a bit of its sparkle (if not its vitality). Similarly, some are of the opinion that many varieties of C. aeneus types have, over the years, been haphazardly bred to form an average from which forms the "classic" farm-bred animal we see today. In my view I could understand these arguments were it not for photographs of the "classic" C. aeneus appearing in the older hobby books.

Overall, there is one hugely important point concerning colour variations in this species. There are many forms of the Bronze Cory but sadly a few artificial ones have also appeared for sale. These sport attractive blood red stripes in the lower back quarter of the fish. These animals have been injected with dye to produce this effect. Many different types of fish are altered in one way or the other in the ornamental fish trade and you will hear comments like "it doesn't hurt" and so on. Whether it does or not is immaterial; hopefully I have shown the true colours of these fish in the pictures above - I cannot see why we need more than that.

Injecting fish with colour dye for financial gain or the unthinking aquarist's cosmetic benefit is animal cruelty at its worst; you can do your bit by not purchasing these fish, letting the dealer know that you're not happy with them being in stock and spreading the word to that effect. I now step down from my soapbox.