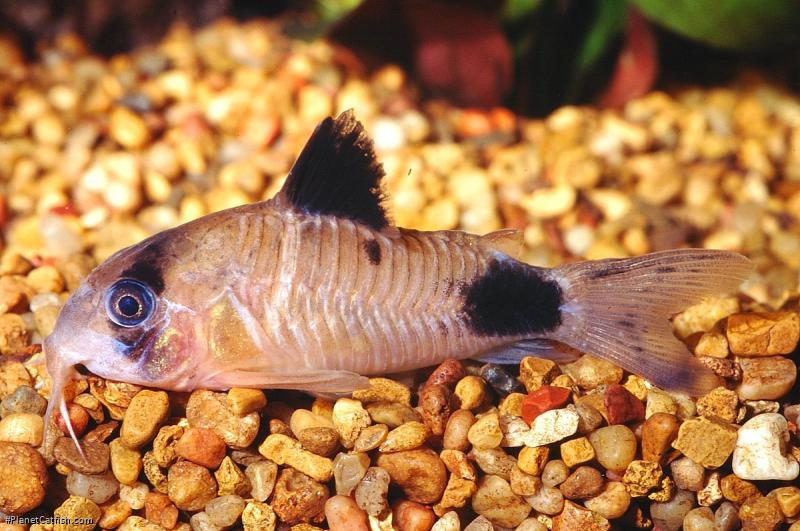 From the time of its first description in 1971, this species was destined to become a favourite amongst aquarists. There were reports of it being bred in Germany in the late 1970's. However it took a few more years before it made its way into the hobby in any appreciable numbers. The first importation unto the UK came in 1983 with the price of individual fish being very high and beyond the reach of many. However it was not very long before they were commonplace in most fish shops and even after more than twenty years in the hobby they are still as popular as ever.

With their distinctive colours of a light golden tan body with large black spot at the caudal peduncle, black mask across the eye and the large blotch in the dorsal fin, they were aptly named after the Giant Panda, Ailuropoda melanoleuca.

This is a species that has everything going for it. Good looks; size, growing no larger than 50mm SL, for females and 45mm SL for males; ease of breed-ability. All in all a fish suitable for virtually any size of aquarium and hardy enough for even the least experienced novice.

Their basic requirements would be an aquarium with a substrate of a shallow layer of smooth grained sand with groups of largish pebbles, some floating plants to emulate the overhanging vegetation on the banks of their natural habitat in the Rio Aquas and Rio Amarillas, which are tributaries of the Rio Pachitea, Rio Ucayali system. The dietary requirements for this species is easy to provide, they are not fussy and most of the proprietary foods are readily accepted, but the addition of live foods, such as Daphnia, bloodworm or Tubifex will bring them into breeding condition very quickly.

A word of warning with this species is needed however; if they are kept in communal groups with some of the other similarly coloured Corydoradinae species there is a danger of hybridising taking place.