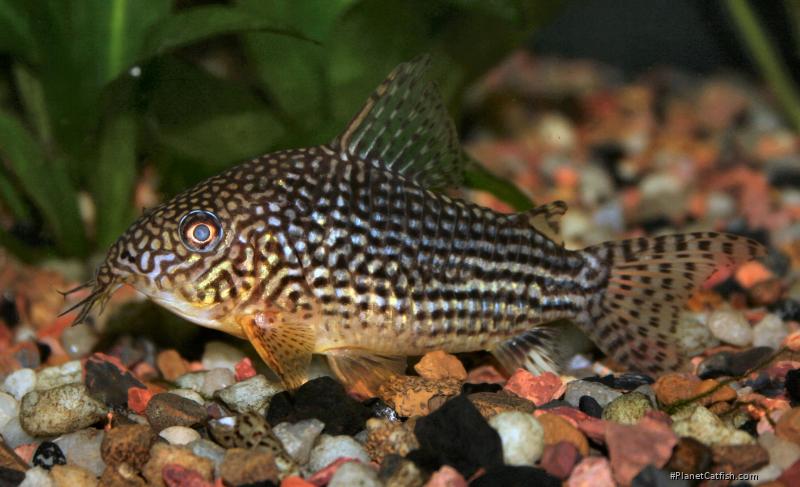 Life before l-numbers? Did it exist I hear you cry - those of us slightly longer in the tooth will recall when Corydoras alone commanded the high prices, front places on magazine covers and were the talk of the local fish shop. These were exciting times in Corydoras land.

From the late sixties and continuing into the late eighties, literally dozens of new Corydoras species were appearing in shops before, during and after the fish in question were being announced to science. Note the difference with l-numbers here; species appeared more often than not around the same time they were described. I have heard it argued from some quarters that had this not happened then the c-number system would have been born a decade or two early. Perhaps, perhaps not. Back then, the Internet had not yet shrunk the global ornamental fish market and I personally doubt such a system would have had the same sort of effect we see with c and l-numbers over the past decade or so.

In some perverse way a described species appeals to the fish collectors out there very much in the way that l-numbers do these days, because description gives a unique title to the collector's cossetted "pride and joy". If you were a cynic, you might think the l-number system was a shrewd move to market undescribed species in the days before common Internet usage. Cynic or not it worked - for both cases described species and l-numbers. Howver, one marked difference I tend to notice is that Corydoras collectors are willing to buy groups of their fish - not something many, particularly budding, l-number enthusiasts consider. This is perhaps because it is well known that all Corydoras shoal and should be kept in groups (again, a sweeping generalisation that I should temper with those few species where the male Corydoras can become noticeably aggressive) and also that it is commonly held that Corydoras tend to reproduce more easily.

Back to the Cory heyday. Rather than resort to some dull and ultimately predictably lament of the passing of those halcyon days (which would be somewhat inappropriate as most of those fish are still available and we still have all the new l-numbers to contend with too), let's just talk about one of the stars of - what is thought of by some as - a golden age.

For me it all boils down to timing. The fact that aquarists already had some experience in keeping and breeding many of the already available Corydoras and many new species appeared equally easy to keep (peaceful and ready to spawn in captivity) those prepared to make a large outlay could quickly turn a tidy profit from sales to the local fish shops, clubs and societies. This month's catfish, Corydoras sterbai, has all these good things plus one other important factor - it is a stunning fish to look at.

Perhaps the most striking thing about C. sterbai is the sunset orange pectoral fins. They develop these from a young age (unlike some other Callichthyids who only develop them in adult males) and are quite unusual among Corydoras. The real giveaway however is the white spots on the dark brown domed head. Sterba's Cory can attain a good size and proportion for a Corydoras and large adults are impressive fish on their own. A shoal of large adults (an unusual site) is a fantastic sight - the eye catches the bristling mass of orange fin spines as the fish scuttle past.

The fish itself is named after the German aquarist Dr. Günther Sterba. The term aquarist is used fondly as, while the Doctor obviously has a love for fish keeping, he also has a day job as Professor of Zoology at Leipzig University. Within aquarist circles he is known for what are widely regarded among the best aquatic books ever published (Freshwater Fishes of the World, The Aquarium Encyclopaedia and his much loved Aquarium Handbook) are still benchmarks for the rest of us.

It is hard to misidentify this species but it can be confused with Corydoras haraldschultzi, although the latter is a long nosed species where C. sterbai is the dome headed form - the easiest way to tell them apart is that the Sterba's Cory has white spots on its head from eyes down to snout. C. haraldschultzi does not. Corydoras sterbai has recently become available in albino form.