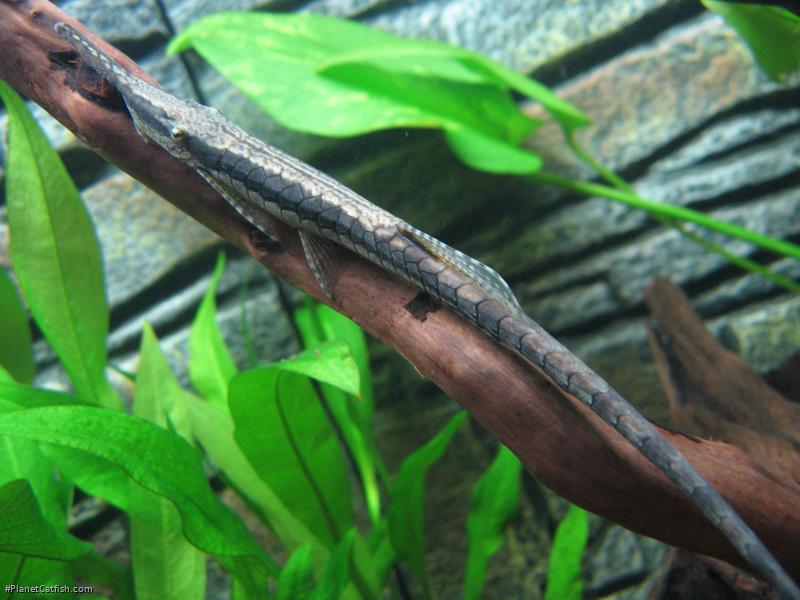 By anyone's standards, these are odd looking fish. They can be found for sale from time to time in good retailers but you have to look hard to spot them if they are in a decorated tank. They are very inactive fish; their twig-like shape and camouflage conceal them most effectively against bogwood or similar backdrops.

Inactivity aside, the fish will stay visible if housed in a dimly lit situation with peaceful slow moving fish. The biggest problem with keeping Twig Catfish is fluctuation in water quality. I have seen these fish die after a fairly 'old water' tank was given a 25% untreated water change. The three individuals were simply found dead the next morning although the tank contained a number of tetras and a large shoal of Paraotocinclus, the latter of which survived, looking completely unaffected.

The fish is an algae eater although much prefers eating algae off long plant leaves and wood rather than the aquarium walls. Care is needed when moving these fish as their snout-like anterior protuberance is prone to bumps and knocks and will more often than not become infected if damaged in transit.

There are nearly 60 species of Farlowella and also a few related genera (Sturisoma especially) that look very similar. As these fish are almost always wild caught and imported, you can find a rarity in amongst large shipments from time to time. Oddly you never see Farlowella species for sale smaller than around 3-4'; perhaps the youngsters do not travel well? So you'll just have to take on the (not inconsiderable) challenge of breeding these elegant sucker-mouths to find out what juveniles look like.