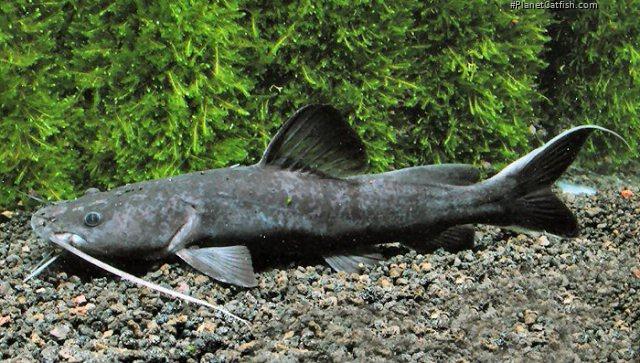 A catfish of character this month, meet Hemibagrus wyckii - the James Bond of catfish. A suave, elegant loner with an interest in gadgets. A fish that will casually destroy most things in its immediate surroundings while remaining entirely endearing to its audience. Tall tales follow this catfish wherever it is kept. My favourite one, heard (sadly not witnessed), first hand was of a British aquarist who kept one of these fish in its own large aquarium. Every now and again the owner would remove the tank hood, put a broom handle in the tank which would instantly be attacked and dragged around the aquarium with the owner holding on (just) to the other end of the wooden pole. Such displays of sheer power can also cause trouble for the fish itself. Other tales include an individual that took it upon itself to crush an aluminium heater guard. Apparently they also enjoy a good chew on rubber heater clips/suckers and I think this would extend to anything in the aquarium that appealed to the catfishes curiosity. Needless to say, smaller tankmates are in immediate peril. Perhaps the best quote of all comes from David Sands in his Catfish of the World series in which he claims, "in the authors experience the only freshwater fish clearly unafraid of man".

So how do you keep such a "wicked" aquatic demon? Answer: Alone. And carefully. Keeping this fish is all about planning. It does not require particularly fastidious care or much attention. It is not dangerous unless you are another fish. Once adult, feeding it every week or two and changing the water is about all you need to do. Feeding is a rewarding experience for both fish and keeper alike - the two will get used to each other's ways. But you need to plan ahead to ensure you can achieve this goal. The aquarium needs to be large, this species will grow past 24"/60cm, a minimum would be 30" wide aquarium, the longer the better, 6 foot long tank is probably an absolute minimum. That's a lot of aquarium for one fish, but what a fish! A heavy hood is required as this fish is a good jumper (usually in the pursuit of food) and external heating and filtration are a good idea. External heating because the catfish have a habit of tearing, pulling or chewing heater stats and thus causing much damage - potentially even danger - to the aquarist from faulty, submerged electrics. External filtration because you can maintain it without disturbing the fish, risking a nibble or escape attempt.

Why bother with all this effort? Well to my mind this fish is one of the kings of the large catfish. Its velvet black colouration is jazz-club cool, its blue eyes are seductive yet cold and the fins of adults are tipped in an attractive snow white, adding to the impression of understated power. Those blue eyes stare at you, following you around the room with calculating intelligence. If the fish is hungry it will pace around the tank reacting to your presence like a chained guard dog. This is a large, responsive, smart pet fish. Yet the best part is that is possible to keep this species in an ethically sound manner (it doesn't get THAT big) and will grace any large fish room with its brooding persona.

Feeding times have never been so much fun.