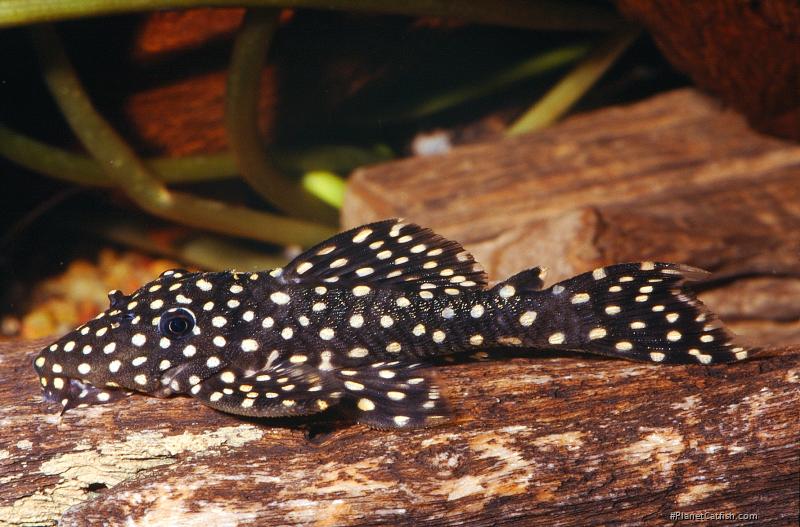 There are an awful lot of L - numbered plecos that have a basic black with many white spots colour pattern. This is one of the more commonly seen fish with these colours. Some specimens can exhibit a more yellow tinge to the spots and this appears related to water conditions.

When it was first offered for sale (before it was assigned its scientific name) the fish was also labelled as the Tusken or Vampire Pleco, since classification the common name Galaxy pleco has become more often used and for the sake of continuity it is adopted here. Additionally, the tusken and vampire features (a strange bony growth on the fishes head and it's fang like teeth respectively), are characterisitic of the genus and don't identify this species clearly. Although its colouration is not unusual, it is however odd in that it has a large front "tooth" - the use of which is unproven - although a few theories exist. 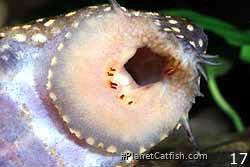 The specialized dentistry is not for rasping algae from bogwood - I did not notice any tell-tale toothmarks (like those left by Royal Plecs, Panaque nigrolineatus) on any bogwood present in the tanks with these fish. It also was a poor green algae eater in the way, for example, a common pleco is not, although it did make some impact on brown algae. Maybe the "tooth" (you can see it protruding out of the top of the fishes mouth in the out-of-water shot below) provides some function in the fast water environment that the fish hails from and it is under-utilized in the home aquarium. I personally favor the idea that it is used to gain access to crustacea, molluscks or insects embedded in rotting wood or thick algae. The fish does eat meat and can despatch a frozen prawn in record time (for a pleco). It is also reported by other keepers of these fish that they eat snails too.

It is a territorial fish; I had real problems keeping it with a Polka Dot Catfish, Synodontis angelicus, but in hindsight keeping two similarly patterned "warmongers" together was not a good idea. In order to avert an aquatic world war III, I swapped out the S. angelicus for a S. alberti which did happily coexist with the Galaxy Pleco. This underlines the extra thought required when mixing two species of fish that would never encounter each other in nature.