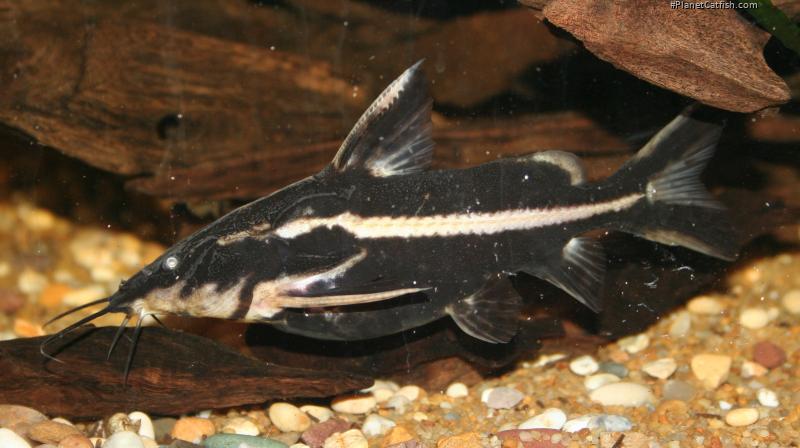 It's a pleasure to write about a species I am keeping at the time of writing and indeed have been keeping for some time. I have a group of five Orinocodoras and they are a very straightforward catfish. There are also straightforward in being monotypic; that is to say there is but one species of Orinocodoras.

As the generic name suggests, this species is found in the Orinoco river basin. The Orinoco is one of south America's longest rivers with around three quarters of that length to be found in Venezuela and the remainder in Colombia. Exports of this species are usually from Colombia and sometimes from Venezuela or indeed Peru. In the past they had been mixed in with shipments of Platydoras that share the basic colouration. It strikes me as something of a halfway house between Platydoras (similar patterning, overall shape, scute base) and Rhinodoras (similar fleshier mouth, adipose fin, more elongate). However it is most commonly confused with Platydoras.

The basic colouration is a little more mottled with shades of dark gray and black rather than the more uniformly coloured relative. The eye catching lateral white stripe is also a bit thinner. However, these features are unreliable especially when comparing different sized individuals. A much better guide is the longer muzzle and, best of all, long low adipose fin of Orinocodoras compared to the higher and more rounded adipose fin found in Platydoras.  In larger fish, the more pronounced side of body scutes which are wonderfully architected are also more evident. These external bony lumps are best viewed from above.

It's to the muzzle that the aquarist should direct their attention. This species is much more of a digger that the more common Platydoras. It is built to root around softer substrate and sand.  The do this to great effect being also a little more evident during the day than Platydoras.

In my group there is a significant size differential between males and females. Females being at least a third larger in length and I would suspect at least the same ration in terms of overall mass. I am keeping them in a 30"x18"x15" aquarium which is moderately lit and has a single large terracotta pipe masked from the view of the keeper by a pile of bogwood. The substrate is very fine gravel and they are kept in a moderate current at 78F. They all live together in the pipe without sign of injury and, while on that subject, the heater in the tank is placed out in view and is fitted with a guard. This species is one that will burn itself (usually its soft belly)  on badly placed heaters.

Feeding is simple. Anything is taken. They are more active the hungrier they are and, if kept alone, only need feed every three or four days. I have kept this fish with smaller fishes and I think even fish a tenth of the size of this fish would be safe in their company. My group co-exist with cherry shrimp, and while the crustaceans are not reproducing exponentially (as is their want), there are not wiped out either. If it wasn't for the current, I think the tank would do well with some floating plants.

Exporters and importers are getting wise to the novelty value of this species and the days where you could scour batches of Platydoras for the odd Orinocodoras are pretty much gone.  On the plus side, that means this species is often sold as the correct name and obtaining a group is easier.

This species comes recommended for a gentle or robust tank, it's only requirement being that enough food reaches it. Their gregarious nature means a larger tank for a group is suggested. All food is taken to the point the fish looks obese. So, perhaps a good analogy from the dog world would be the black Labrador. Friendly, good looking and prone to overeating!