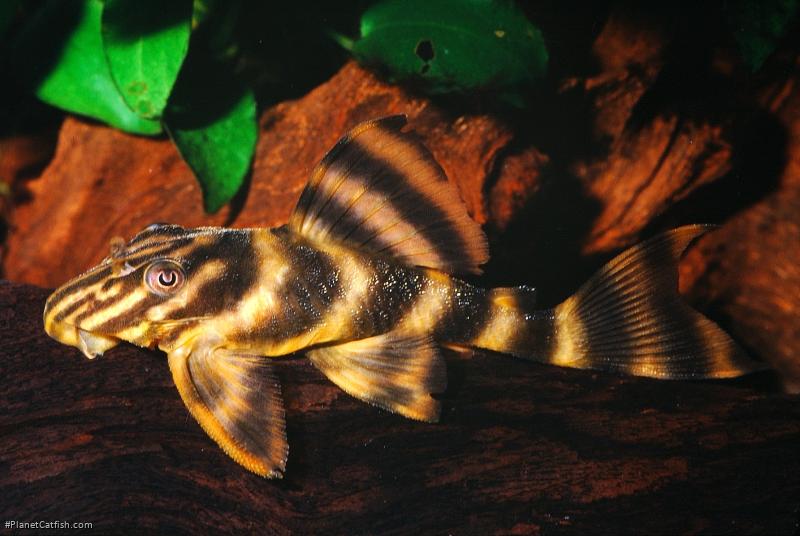 Running Planet Catfish has its highs and its lows. There aren't that many lows to be honest (aside from bills and having to spend six hours on a sunny weekend patching the forum with the latest anti-spam modifications) but there are quite a few highs. Every now and again I get an email out of the blue that reminds me why most of us keep fish. Such was the case for this month's article. A few weeks back I got an email from a lady called Irene Miller, in it was a few pictures of some Gold Stripe Panaqolus, AKA LDA01 or L169 plecos that had spawned in her care. Now, big deal you might say, everyone is breeding ancistrine plecos these days - but it made me think. Here's someone who, living in a small village on the north coast of Norfolk, retired and who had only been keeping fish seriously for about five years or so is breeding fish that, when I started keeping fish, weren't even known to the hobby. When I started Planet, we knew next to nothing about these fish let alone breeding them.

What's my point? Well, Das Aquarium's LDA numbering system started out in November 1992, Planet Catfish appeared in the same month in 1997, the L-number system started in DATZ a year later in December 1998. Fast forward to June 2007 and we're now looking at regular aquarists (and that is no slight at all on Irene, who as you will clearly see, is a diligent and competent aquarist) spawning these fish with regularity. Isn't it great to share knowledge? Here's Irene's account of her spawning success. 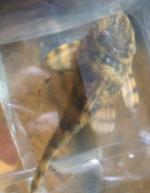 I first bought my pair of Gold stripes in September 2004, they were adults then so no idea of age. But old enough to sex — here is one in the bag newly arrived.

I kept my pair in community tank (a Trigon 190) for a couple of years , no plans to breed or any sign of breeding, in fact I hardly ever saw them. A couple of years later, I bought a new 4'x1'x1' to breed my common BNs (Bristle Nose Ancistrus) and moved the Gold stripes in there in the hope that I might see more of them and maybe the hormones or whatever from the commons would encourage them to breed. To trigger the common BN I did not do extensive conditioning, as they had bred earlier in a smaller tank, just did no water changes for a week then 20% cooler water every other day, and the commons laid. The tank was kept at 26-27°C with fairly soft water. It has an external eheim ecco filter and an internal fluval 2. Food mainly vegetables (peas, courgette, cabbage,etc) , algae wafers, all put in for the BNs, plus tropical flakes for the neon tetras No mating was seen between the gold stripes although the male took up territory in a clay cave. However, about 6 months later (summer 2006), I added a large driftwood log which I had drilled several holes in and had had soaking under stones in the garden pond for months to make it sink. This was what really turned them on. I have other wood in there but without holes in it. The male immediately took over a cave in the log. 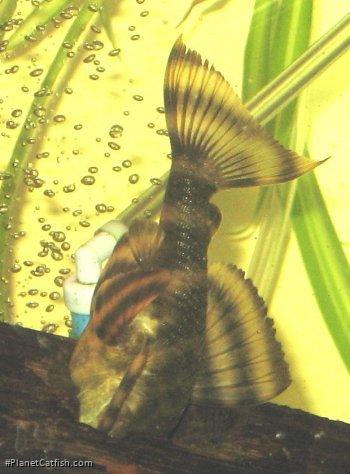 In the meantime the common BNs were mating regularly throughout, which meant lots of young BNs around so water changes were almost every day a bucket or two. The first time the gold stripes were trying to mate I thought they were just squabbling over the wanting the same hole as they were taking turns to go in and out and waiting outside for a chance to get in. But then no activity for a month so I assumed territories resolved and the female took up residence in another hole. However next month saw similar activity, she sat in hole headfirst for about 4 days with him sometimes on top of her. I had no idea if any eggs were laid but he fanned for a few days after. The next month repeated, two days head first then she realised easier if she went in tail first and spent a day in with male on top. Then he fanned for two weeks but no young. Also similar activity the following month. I asked an expert who said I must have two females and a dominant female can take on characteristics of a male if no males in tank! I then noticed the L333 male I had in the tank was giving him some harassment, so I moved him out. Anyway early Nov 2006 they mated again - but his time they raised about 5 young! I did not dare scare them with a torch, but once I felt he had fanned long enough to have young hatched I did a quick picture with flash and I could see the young! 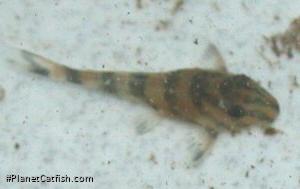 I continued with small water changes every day to keep quality good. I think they may have laid earlier but the L333 annoyed them in the night so the eggs got eaten! The hole is in a piece of drift wood 1.25 inch diameter (only because this was the largest drill my husband had, a size larger may have been better.) hole is not very deep, about 2 -3 inches, as only as deep as log would permit. She then laid again two more times at about 35 day intervals and each time 5-6 youngsters emerged. To the right is a picture of her trying to get into the hole to lay eggs, you can see she is gravid and her fins are more orange than his.

They don't all come out on the same day and some stayed with dad up to the next mating —so he had no food for months other than chewing the walls of the hole. Then they rested for a couple of months, allowed dad to feed up I guess, and April 2007 they started again, no special conditioning other than good regular water changes and plenty of varied food. This time she laid even more eggs than before.

Hopefully they will reward me with some more babies yet. I have no idea how long these fish live for. I hope you found this interesting, thank you for reading it.