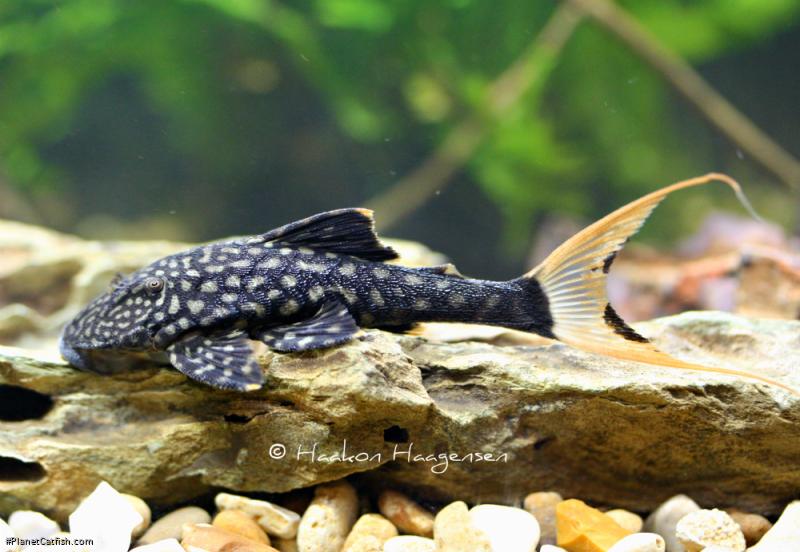 We are, again, grateful to have Erlend Bertelsen write about another great species of catfish close to his heart. As Erlend explains, this depth loving fish was something of a mystery that is, at least partially, now explained.

The genus Panaque contains some eye-catching fishes. If you have the space to keep them, they certainly are some nice looking fish. They have a different body-structure and are way more bulky than other L-numbers. Most of them also have a great colour and pattern. However, they do grow large, and they produce a lot of mess. So, a good filter system is necessary.

The smallest species of Panaque is Panaque bathyphilus, L090. It is reported to grow around 40 cm in standard length. Compared with some of the biggest, like Panaque schaferi that grows to 60 cm+. 40 cm is considered small! And in many other ways this fish also is different than the other species in the genus. It is the only one that has long filaments in the tailfin, and they have these in all stages of life. They also have small eyes, compared with the other Panaque. And it's the only one that could be collected in the wild as totally white and after some days change back to its normal colour. There is a reason for this; they do live in the deep water in the main channels. They have been collected as deep as 18 meters and do probably live even deeper. In these dark depths, they don't use their eyes as much as in sunlight. They do not need colour on their body to hide from predators, and they could use their filaments as feelers.

The scientific description of this fish is based on a white fish collected in Rio Solimos in Brazil. Sadly, the fish don't keep their white colouration when it raised from the deep, and after some days they change to their normal colour. Every Panaque bathyphilus found for sale or established in an aquarium has what I would call their normal colour, that is a marble pattern of black and green and a white tail-filaments. I find it in a way strange that the scientific description is based on a white fish, and if I remember correctly, they didn't note that they do change colour. Even though the fish is described from the Solimos in Brazil, most of the fishes in the trade are exported out from Peru. In Peru they are collected in Rio Ucayali.

In 2012 I was lucky to collect it myself in the Ucayali, and we didn't collect them deep. They hung around a tree that was fallen out into the river. We collected six fishes in the same tree, from 6 cm to 20 cm. The fisherman that was with us on this trip, told me that they called Panaque bathyphilus for "Pleco Papa Ojo Chico". They mean that this fish is papa of the plecos. They also have "Carachama mama" that is the mother of the plecos. I believe this is L351. In a similar vein there is also Pleco papa jumbo that is the Panaque schaferi (L203) On exporters fish lists from Peru you can also see that they sometimes use numbers a L090b, L-090c and L-090d. As far as I know this a, b and c is a name Aquarium Glaser used before they got their L-numbers. L090b for L329, L090c for L351 and L090d for L203.

When keeping this fish, you need to be sure to have a big enough tank, and a filter system that can handle the amount off mess they produce. As with every Panaque they need to be feed a "green" diet and remember to provide wood in the tank, for hiding and for eating. I have never heard about breeding in captivity, and I guess that the big size makes it difficult to breed in your typical home aquarium. For me, Panaque bathyphilus is one of the nicest looking fish in the genus Panaque, and according to me all Panaque are nice looking fishes!