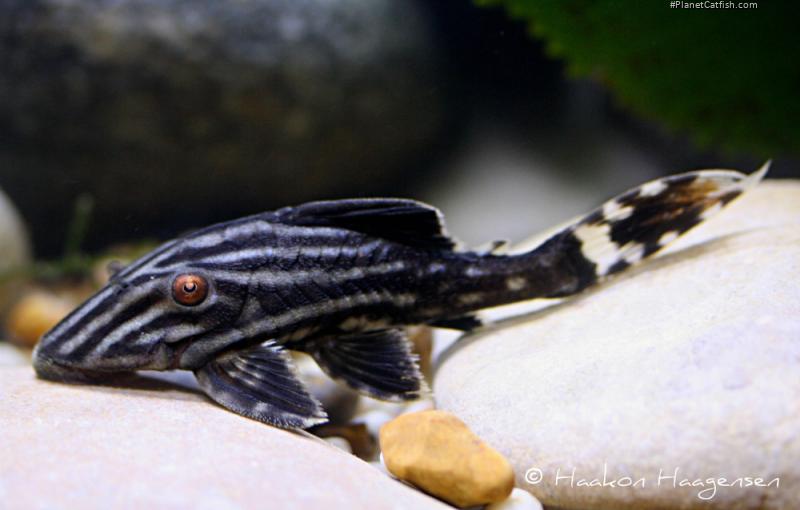 Royal Plecos are truly magnificent show fish. It is often written that their striking juvenile colours fade with age, but I've seen 14" adults that puts paid to that theory. Colouration aside it is probably their unusual shape and utterly graceless movement - akin to a swimming rock - that endear them to many aquarists not usually interested in secretive catfish. Indeed secrecy is the fishes main drawback. Once settled the fish will make occasional forays for food and this bravery increases with age but youngsters however can be considered nocturnal. They tend to cling to their beloved shady refuge for most of the day, movement only precipitated by intrusion of another fish into this sanctuary.

The Royal Pleco's wide geographical range also gives us some interesting colour variations which may someday be described as further species. There is a Brazilian gold stripe variety with a black background colouration, the shade of green ranges from olive to near blue, and the amount of black background colouration in relation to the stripes varies greatly. Some individuals have striped pectoral and pelvic fins, others are plain. Some sport entirely clear caudal fins, others have a clear half moon shape. In all these variations the distinctive red eye doesn't remain a constant either. 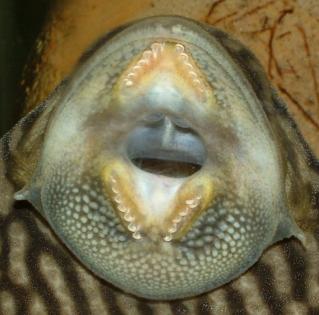 All members of the genus Panaque have very distinctive teeth. The underside of the sucker mouth is quartered and on each quarter (or ramus) lies a slanted row of 6 - 8 spoon shaped teeth. The four rows of teeth are slanted in such a way around the mouth as to give the appearance of a rhombus with the mouth at the centre. These teeth are put to good effect when rasping algae from all surfaces, so much so that they will soon scratch plexi-glass tanks and you should keep an eye on the silicon at the corners of glass tanks. Whilst moving a 6" P. nigrolineatus, I kept it in a large polystyrene shipping box. Alarmed by a squeaky scratching noise coming from the box, I went over to investigate, but the noise stopped. I repeated this, rather comically, and at every approach the noise, again, stopped. Eventually, by standing very still over the box, I discovered the noise was the Royal Pleco grazing from the polystyrene base!

Although primarily vegetarian these fish will also take fish meat from time to time. Certainly mine would not shy away from the occasional frozen prawn, but the bulk of their diet was vegetable scraps taken from the kitchen, then attached to a rock near the fishes chosen refuge.

On the topic of feeding, it is quite common to find young Royal Plecos offered for sale in a terribly undernourished state; they require dedicated attention should you decide to purchase them. This can be achieved by quarantining them until they are feeding regularly and their body fats are restored. This is best accomplished in a bare tank - unpopulated except for the patient - and it should include a large piece of bogwood for refuge. Heavy filtration, alongside frequent feeding and water changes should be utilized to bring the fish round. Irrespective of the state of the fishes belly, individuals offered for sale with sunken yes almost invariably do not respond to this treatment and seem to be "too far gone" to be saved.

That said, good retailers know how to look after these fishes as soon as they get them and, assuming you do the same, these are plecos that live for many years. While they are not an inconsiderable investment, they really are great showpiece fishes and if you can tolerate the mess they make as being part of the challenge, then you will have yourself an excellent fish to look after.