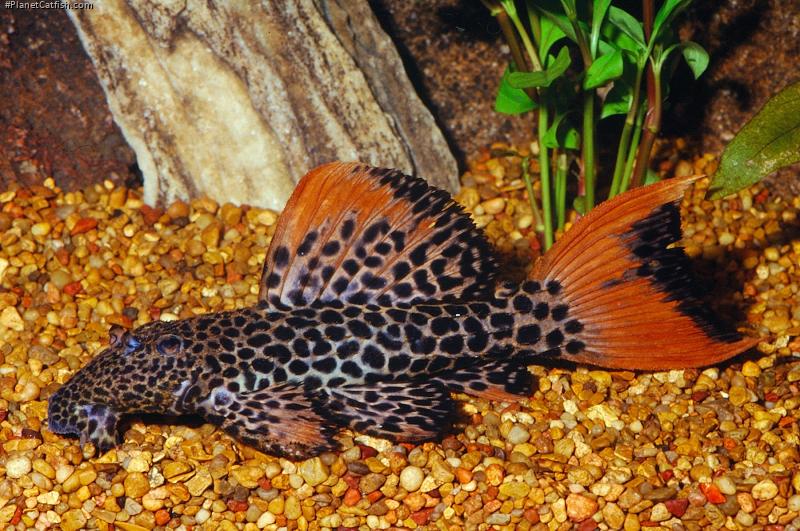 Pleco common names are the tabloid press of the catfish world. Honestly. Not a day goes by without a new "super king dragon regal pleco" or the like making an appearance on an import list. It makes l-numbers look downright organised. When writing this I was tempted to write a pleco name generator along the lines of the star wars name generator or similar. These entertaining web sites could surely do with a pleco name version. Why we need to concatenate such words normally reserved for large felines, fantasy creatures and royalty to describe South American loricariids I do not know. Well, I actually do know and it's simple: money. The more attractive or at least outlandish the name, the more likely it is to be ordered, especially in pleco-crazed recipient countries. Fortunately many exporters are now equipped with digital cameras and, as they say, a picture tells (or in this case saves) a thousand words.

So, you might think that I don't like the name leopard cactus pleco. Well, it's a game of two halves really, the leopard bit really is just another way of saying it's got spots. That is unhelpful - why not say spotted and be done with it - while the name cactus pleco (as applied to the entire genus) is brilliant. I believe our German friends are responsible for this particular advancement of the hobby and may I say what a great common name! These fish are just downright spiky! They aren't safe to handle without gardening gloves on and the name cactus pleco perfectly and imaginatively (alright they're not green) describes the distinguishing features. We should all take note from that. Aquarists generally don't have the fun or privilege of thinking up scientific names but can excel at common names (without the academic research effort required to describe a species). Think of all the common names that really stick; (black lancer catfish, moustache catfish, banjo catfish and so on) these are all classy examples of the art.

Leopard Cactus Pleco is a good common name because it identifies the fish (at least down to a few species) and tells us a bit about it too. It has black spots, a tawny background and is spiky. Fair enough, but there is more to this fish than apt nomenclature.

The genus Pseudacanthicus is one of those which most aquarists would say is instantly recognisable but we can't easily say exactly why. Tying individual species down is yet more difficult. The genus was erected in 1862 and houses some species described as far back as 1840. That species was described from a drawing sent from the field and no one knows where exactly! Like many other pleco genera, most tropical South American rivers have their own Pseudacanthicus and many are very similar maybe variants of a theme. What makes this very confusing is that imports from very different parts of the amazon basin appear to contain identical fish while imports from the same locality can conversely show considerable variation. Even amongst the imports of P. leopardus you will find slight differences in colouration, spot intensity and fin colouration. A question mark even hangs over the identify of this species as it was described from a Guyanan river flowing north west into the Atlantic, not from the Rio Negro which flows into the Rio Amazonas proper. It must be said however that the northernmost reaches of the Rio Branco (which flows almost directly south into the Negro) rub shoulders with the Guyanan river system.

Large P. leopardus are magnificent animals, but will only reach such proportions given correct diet. Think of them as carrion feeders; they like nothing better than chopped mussel or dead fish. Green foods are also (reportedly - I have not seen this in my fish) accepted. You get the feeling that, only because nothing more challenging is on offer, that these fish will absent mindedly demolish vegetable matter presented. Looking at the long, well defined claw-like teeth nestled in the circular maw of these fish, you don't imagine cucumber to be naturally top of the menu somehow.

So, a great show fish and one that would be a really great challenge for the specialist Loricariid breeder.

P.S. If playing around with the star wars name generator use fish tank additives instead of supplements - I was Juldi Leedi, Lla Escort of Black Water Extract. It gets really weird if you start using fish scientific names too!