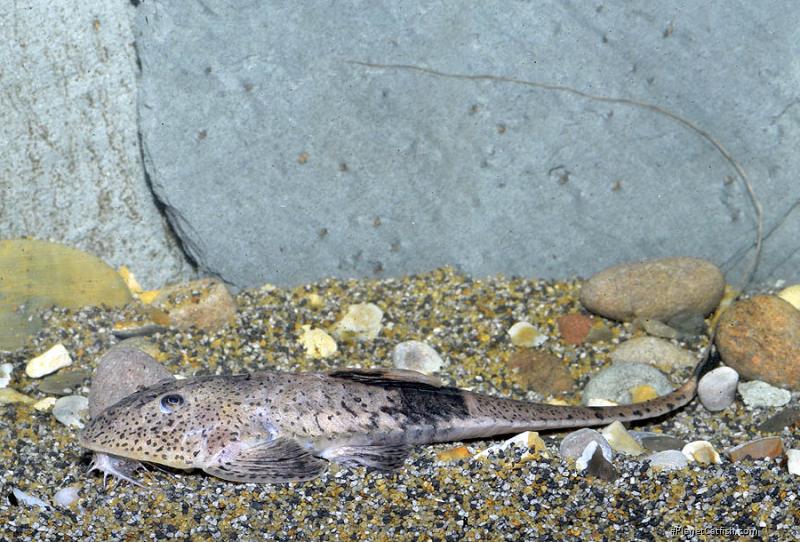 A New Year and a new CotM author, PlanetCatfish.com forum regular Rupert Collins introduces this substrate hugging whiptail with which he has had success both on the keeping and breeding fronts.

P. aff. apithanos is typically gun-metal grey/silver/white in colour, with a thick black dorsal stripe extending down to the rostrum. P. sp. `marbled` is considerably variable in colour and pattern, even among specimens from the same shipment. P. sp. `marbled` has the same black dorsal stripe as P. aff. apithanos, but the stripe is frequently less distinct, and the base colour is more of a tan/buff with darker marbling along the "cheeks". Some specimens are more speckled with slightly greyer colouration. Both of these Pseudohemiodon are able to change their colour quite significantly, hence the common name "chameleon whiptail".

P. apithanos was discovered in the Rio Conejo in Ecuador, but aquarium imports are a related species (P. aff. apithanos) sourced from the Rio Itaya via exporters in Iquitos, Peru. P. sp. `marbled` is also caught in the Rio Itaya, and possibly also the Rio San Alejandro (the same river as the popular Panaque sp. L204). Both fish appear on Peruvian export lists as "loricaria chameleon".

Pseudohemiodon are not a common export, and are only likely to be found in specialist aquatic stores with good Peruvian or Brazilian suppliers. They also command a high price due to their scarcity, large import size and novelty appearance. However if one can locate them they make excellent easy to care for aquarium inhabitants, provided a few basic rules are adhered to.


Maintenance
The flattened body shape of this genus clearly shows how they are adapted to living on and in the substrate. Much the day is spent buried in the sand with just the eyes visible. They will only swim if disturbed, and prefer to travel by "walking" on their pelvic fins. In the aquarium, having a sufficient area of sand is crucial to their care. Only sand and fine grit (<1mm) will allow them to bury themselves. A tank with a footprint of at least 0.5m2 is required for a small group, with a wider tank (18"+) being best. The substrate should be as open as possible to allow natural foraging behaviour. These fish can become very skittish if they feel at all cramped, and will bolt around the aquarium, possibly harming themselves. Rooted plants are not advised for this reason unless the aquarium is very large and there is enough space in other areas. Attaching plants such as java fern or Anubias to bogwood is recommended as this will provide shade. Pseudohemiodon will be more active in a dimly lit tank when there is structure above their heads. Bogwood and branches can also be leant against the sides of the tank to diffuse the light (see Figure 4 below).

Water parameters are not too critical as this fish is a white water species and appears to be quite adaptable. My group is kept at 27-28°C in fairly soft water (250µS/cm), at a pH of around neutral (6.8-7.0). A moderate current is required, with enough water movement to carry away any detritus, but not sand. Well oxygenated water and regular large water changes are essential.

Tankmates should not be too dominating, and should leave the Pseudohemiodon in peace. My group are currently housed with spotted climbing perch (Ctenopoma acutirostre), African red-eye tetras (Arnoldichthys spilopterus), Panaque sp. L204, Hypancistrus sp. L262 and Farlowella vittata.

Feeding is not problematic as Pseudohemiodon are quite greedy. Their complex web of barbels and reduced dentition is geared up towards a life of sifting and scouring the sand for invertebrates. They will eat any small meaty foodstuff offered, including bloodworm, mysis, krill, glassworm, tubifex and daphnia as well as prepared foods including algae wafers, carnivore pellets, flake and granulated food. A varied diet is likely to be important in females becoming conditioned.

Sexing
Pseudohemiodon are not easy loricariids to sex. The key difference is in the body shape of mature, well conditioned specimens; females are considerably fuller in the body behind the head than males (see Figure 1.). Alternatively, the most clear method of sexing is waiting until they breed, as it is the male who cares for the egg-raft under his modified lip. Rather than attempting to select and sex newly imported fish in the shop, it is probably better to acquire a group.

Spawning
I first acquired a pair of these fish in October 2006 with the aim of breeding them. The other two specimens from the shipment were housed in the Peruvian display tank at the LFS. On one visit to the shop I noticed an egg-raft being brooded by a male. I had to wait until June 2007 before the LFS changed the Peruvian display aquarium to a planted set-up, and I could purchase the remaining two fish. The very next day one of my new fish was brooding a raft of eggs, which was the first of many spawns. The spawning took place at night (it is reported to be initiated by the female). At this point it became clear that I now had at least one male. Three consecutive spawns followed by a three week period of no activity and then another spawn (all brooded by the same male), indicated I had three females and one male.

The eggs are approximately 3mm in diameter and are initially straw yellow in colour. Contrary to other reports, I have found the male to be a diligent father. The male sticks with the clutch, and prefers to sit in the area of strongest current. Although he is capable of burying himself along with his clutch, he usually chooses not to. Approximately 10-20 eggs are laid with each spawn, but it became apparent that the egg-rafts were reducing in size during their development. It was not clear whether these eggs had become fungused (and eaten by the male), or been predated by the spotted climbing perch or African red-eye tetras (I suspect the latter). I am currently experimenting by immediately removing the eggs from the male, and rearing them separately in the fry tank.

The first eggs took 21 days to hatch at 26°C. The temperature was later raised to 28.5°C, and subsequent spawns took slightly fewer days to hatch. As any larvae would quickly be devoured by tankmates, the eggs had to be removed before hatching. It is not easy to gauge when they are ready, but mine were removed after the yolk begins to rapidly decrease in size within the egg. Catching the male is not easy, as he is capable of a quick turn of speed when threatened. Any mistakes and the larvae/eggs were quickly eaten by hungry tetras. Obviously in a tank without predators, the eggs can be allowed to hatch when they are ready. Reports suggest spinal deformities can occur if the larvae spend too long in the egg. The eggs can be artificially hatched by removing them from the water for a few minutes. The drying effect causes the egg membrane to shrink, and the larvae can be popped out by gentle manipulation with the fingertips.

Rearing the Fry
The larvae were quite large and well developed when hatched at approximately 15mm. The yolk sack lasted approximately 24 hours before it was consumed. The first batch of 19 larvae were placed in a fry-net at the surface in an area of high flow at the filter outlet so they were supplied with fresh, well oxygenated water. Three weeks later, the fry were given their own 88 litre tank (24" x 14" x 16"). The only decor being a black backing and 1cm of fine sand/grit. An airstone was used to keep oxygen levels as high as possible. The tank was kept at 27°C with the same water parameters as the parent's tank, and subsequent larvae were placed straight into the new fry tank (the fry-net was no longer used). Many successful breeders recommend bare bottom tanks, but I was concerned with reports that loricariid fry could be affected by the bacterial film growing on the bare glass. The tank was filtered by a 500lph external Eheim. This may seem excessive, but having a filter that can cope easily with any excess food is essential. A large filter also dispenses with the need for a powerhead. As with the adults, having enough flow to keep detritus in suspension, but not wash sand away is required. This technique keeps the tank very clean. A 15w ultra-violet steriliser was also connected to the filter outflow, which reduced the bacterial load in the aquarium. It is not yet clear whether this is an essential item or not, but reports often state that Pseudohemiodon fry suffer from repeated "unexplained" losses. In the dozens of batches of eggs reared, I have not suffered one single "unexplained" loss.

As soon as the yolk sack was consumed, the fry were given their first food. I chose to feed them Tetra Prima (Color Bits in the USA), a dry food readily eaten by the parents. The granules were powdered and soaked for five minutes before feeding. The fry accepted the food instantly, but unfortunately this caused the first "explained" losses. It appears that the fry, especially when very young, are susceptible to overeating this kind of food. It was not clear exactly how the food caused the fry to die, but it was always a few hours after feeding. The abdomen was bloated, and the red food clearly visible in the gut of the dead fry. As soon as this problem was understood, and food was offered in frequent smaller portions, there were no more fatalities. More recently, a pestle and mortar was employed to blend a variety of dry foods including algae wafers, carnivore pellets, Tetra Prima and spirulina flake. This mixture was fed two to four times daily. Once the fry reach about 30-40mm, feeding can be supplemented with frozen foods such as bloodworm, daphnia and brineshrimp. The fry took around six months to reach a saleable size of about 60mm (SL). Water changes were around 40% 2-3 times weekly with reconstituted RO water. I am sure the growth rate could be improved with a larger growing-on tank, warmer water and more frequent feedings/water changes.

In all, a rewarding species with a quite distinctive character. Highly recommended, if you can find them.