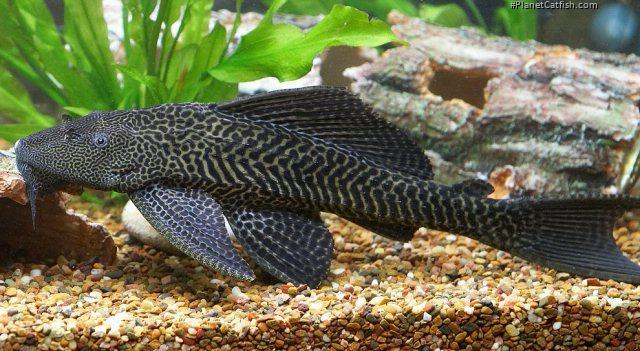 Rupert Collins tackles another suckermouth species this month and finds it surprising that in the 10 years of PlanetCatfish.com, and in the 136 Catfish of the Month articles, there has not been a feature on probably the most frequently kept catfish the world over: the common pleco. This is perhaps understandable given the plethora of its more attractive and manageable cousins from the family Loricariidae.

But just what is a "common pleco"? Many people have in their mind a brown or grey nondescript suckermouth catfish, but in fact there are/were several species traded as common plecos. The original commons were species of the Hypostomus genus that were imported in the 1960s from Trinidad and Surinam. These fish were likely to have been H. plecostomus (which the pleco part of the name has stuck in the vocabulary to represent the whole family of these charismatic fish) and H. robinii. As fish began to be exported from more South American countries such as Colombia, Brazil and Peru, a wider variety of "common" Hypostomus species including H. plecostomoides, H. punctatus and H. sp. L266 have become frequently available. Hypostomus are not the easiest fish to identify though, especially without the capture locality.

Since the 1980s however, a different type of common pleco has usurped the Hypostomus as the pleco most likely to be offered for sale (Hypostomus are not frequently seen in shops these days). These new plecos from the genus Pterygoplichthys (pronounced "terry-gop-LICK-thiss") can be easily distinguished from the Hypostomus species by having 9-14 rather than 7 dorsal fin rays. There are maybe three species of Pterygoplichthys commons in the trade, being Pterygoplichthys pardalis (the most common), P. disjunctivus and occasionally P. multiradiatus. P. pardalis has a spotted rather than the reticulated belly pattern of P. disjunctivus, and is more often offered for sale, while P. multiradiatus lacks the coalescing chevron pattern on the sides of the former two species (has clearly defined spots). Bear in mind you may see these fish referred to as Glyptoperichthys or Liposarcus in books or shops, but Pterygoplichthys is now the current up-to-date classification. The identification of these common plecos is by far the most frequent request in the "What is my Catfish" forum. The reason for this confusion is partly that P. pardalis are quite variable in colour and pattern, especially when young (it is easier to make an accurate identification when the fish is adult), and can be found in varying shades of brown and grey. There are even albino varieties bred that vary from creamy white to a chocolate brown/red in colour.

These plecos are bred in vast numbers in the fish farms of Singapore and Florida, a reason which has contributed to their popularity, as they have become considerably more affordable than their wild caught Hypostomus relatives. This very low cost has led to a significant demand for these fish, which are often sold as algae eaters or scavengers to help clear up uneaten food from the substrate. They do both of these jobs very well when they are purchased at 2" long, and are often recommended for beginners with small tanks of around 10-15 gallons. They are also extraordinarily hardy and adaptable, being able to tolerate very poor water quality (high ammonia/nitrite), a wide range of temperatures (18°C-33°C), pH values (5.5-8.5) and low oxygen levels (they are able to breathe air via their modified stomachs). This means they are often one of the first fish added to cycle a new aquarium, and are often the last fish left alive when an aquarium fails. The reason for their adaptability comes from their natural habitat in the wild. Unlike many other loricariids like some fancy L numbers, these species do not come from rocky well oxygenated rapids or quiet mountain streams. They generally inhabit muddy, slow moving lowland rivers, lakes and ponds, habitats which are often inhospitable in the dry season, frequently being hot and hypoxic. P. pardalis is found throughout the Amazon basin, but are seldom exported from the wild now, given the competitiveness of the Asian farmed prices. Like many plecos, Pterygoplichthys are generalist and opportunistic feeders, happy to eat anything they can find, from a piece of fruit to a dead fish (they are often unjustly blamed for killing their tankmates when seen eating a dead fish), but are most often observed grazing algae and sifting through detritus.

Unfortunately, despite being ubiquitous and accepted as such, these common plecos are far from suitable for small aquaria, and can grow at an alarming rate, reaching on average around 14"-16" (35-40cm) total length, and sometimes up to 24" (60cm) in a short number of years. Many folk are not made aware of this when the fish is purchased (do retailers even know or care?), and believe the fish will "grow to the size of the tank". This myth has been proven false time and time again, with enormous common plecos constantly needing re-homing. Although not in the same league as the red-tail catfish (Phractocephalus hemioliopterus), the tiger shovelnose (Pseudoplatystoma spp.) or the paroon shark catfish (Pangasius spp.), the common pleco can definitely be considered a tank-buster.

A further problem with these fish is their effect in the small aquarium. When they are juveniles it is not often a problem, but when they get to 6" or so, their bioload on a small tank with limited filtration gets considerable. Rather than helping clear up the tank, they can contribute significantly to poor quality water, and the subsequent algal problems and illness. In reality these fish need a much larger tank than generally perceived in order to thrive. As an absolute minimum, an average sized adult should be eventually kept in a tank of 48"x18"x18" with external power filtration, and larger being considerably better. Obviously this size tank is beyond the means of many hobbyists. These fish are also long-lived given good conditions and can reach 20 years of age, so the long term accommodation should always be considered when thinking about purchasing one. It is unfortunate that so many of these plecos are bred, sold and kept in inappropriate aquaria the world over, a consequence of this being the irresponsible release of them into non-native waters far from their home in the Amazon. As they are superbly well adapted, they frequently thrive in new, even sub-tropical surroundings, which can have serious consequences for native ecosystems. Pterygoplichthys have been recorded from the wild in Texas, Florida, Singapore, Indonesia, Malaysia, Taiwan, Philippines, Puerto Rico, Mexico and Hawaii.

There is very little justification for selling these fish in my opinion (unless someone can demonstrate they have adequate space), especially when other inexpensive, tank-bred plecos that perform housekeeping duties just as effectively are widely available, and will not grow to the unmanageable size of P. pardalis. The common bristlenose (Ancistrus sp. 3) is a much better choice and can be kept happily in tanks as small as 10 gallons. This is not to say that P. pardalis do not make excellent and suitable tankmates in certain circumstances, such as with messy predators or aggressive cichlids where the common pleco's large size and body armour usually means it is able to withstand attack. The common pleco's adaptability also means it can be kept in a variety of water conditions and as a companion to a range of fish from goldfish to Malawi cichlids.

Taking care of a common pleco is not hard, with all that is really required being a large tank and heavy-duty filtration. As described above, they are not fussy about water parameters, and are able to tolerate extremes, but these are best avoided in the long term. Medium hardness, neutral pH and temperature around 26°C is best. A decent sized P. pardalis will make a mess of a delicately planted aquascape, so any greenery other than java fern and Anubias is best avoided. Decor should be robust enough to withstand the bulldozer-like activities, with big rocks, pieces of bogwood, pipes and plastic plants most appropriate. Do make sure there are ample dark hiding places. A varied diet is essential to good health, which should comprise a significant proportion of vegetables (check out the other Shane's world feeding articles for ideas) as well as dried foods like algae wafers. Breeding this species has not been achieved yet in the aquarium, but this is likely to be due to the size of the tank required, and a lack of effort from hobbyists. They are reported to cave-brood (like many other Loricariidae) in mud tunnels in the banks of rivers. Perhaps these could be simulated in the aquarium with clay pipework?

In conclusion, a quite misunderstood species, which although possibly the most commonly kept catfish in the world, is also one of the most unsuitable.