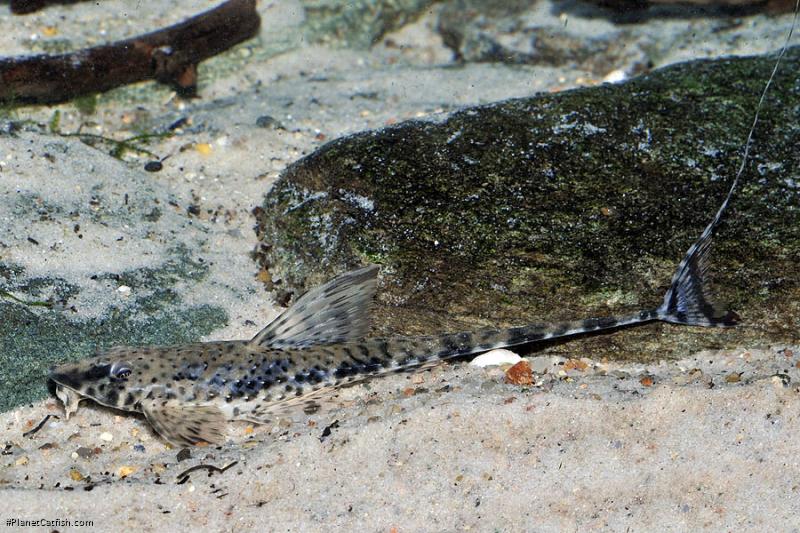 The Hawthorn tree is named after the month, in old English, in which it blooms, and is a sign that spring is turning to summer. Why this is even remotely relevant to this species we are, again, grateful to have Erlend Bertelsen unravel the identity of a fairly well-known Whiptail - and the Hawthorn question. However, as Erlend explains, the main reason for this CotM is to resolve the problem many aquarists, including Erlend, face regarding the correct name for this beautiful species.

The story is complicated, and I have apologise, if you do not like historical science. The problem began when Isbrücker et al. (2001) revalidated the genus Hemiloricaria. Originally erected by Bleeker in 1862 (at the same time he erected Rineloricaria (before it was named Loricaria)). The same year, Isbrücker et al. (2001) moved several species from Rineloricaria into Hemiloricaria and in the same study further erected two new genera, Leliella and Fonchiiichthys [yes, it really does have the letter i three times], and moved some species to those genera. The big problem for many scientists was that this reclassification was mostly based on sexual dimorphism. This is explained in the beautiful book; Baensch, Catfish Atlas 1 by Evers and Seidel. They write the following, "The genera Hemiloricaria and Rineloricaria primary differ in the degree of cephalic bristling of sexually active males. In Hemiloricaria, males have hypertrophied odontodes first between the interorbital and the predorsal region (the "nape" so to speak). These are long, thin, and virtually straight. Second, between the suborbital and the opercular region, i.e., along the side of the head. These odontodes are densely clustered, long, and very thin. Additionally, there is a row of less numerous, bent, spine like odontodes in this area. Third, there are numerous, erect, and bent backwards spines. On the other hand, Rineloricaria has no bristles on the "nape" region. The bristles are densely clustered along the side of the head. They are long, very thin, and slightly bent. On the pectoral fins they are smallish and numerous, as well as erect, bent backwards, and reminiscent of thorns."

But most scientists don't accept Hemiloricaria as a valid genus, preffering it is a synonym of Rineloricaria. Ferraris (2003, 2007) in particular retained Hemiloricaria as synonymous with Rineloricaria, and he dismissed Leliella but accepted Fonchiiichthys. Covain & Fisch-Muller (2007) followed Ferraris. It was Rodriguez & Reis (2008) that accepted Isbrücker et al. (2001) in splitting Rineloricaria and Hemiloricaria; but they had a geographic distinction to the split.

After this we can see Rapp Py-Daniel & Fichberg (2008), Fichberg & Chamon (2008), Ingenito et al. (2008), Rodriguez & Miquelarena (2008), de Carvalho Paixão & Toledo-Piza (2009), Rodriguez et al. (2011), Vera-Alcaraz et al. (2012), Londoño-Burbano & Urbano-Bonilla (2018) following Hemiloricaria as a junior synonym to Rineloricaria, and continued to accept Fonchiiichthys as a valid genus. To close it off, Covain et al. (2015) presented a molecular phylogeny of the sub-family Loricariinae and proposed synonymising; Ixinandria, Hemiloricaria, Fonchiiichthys and Leliella with Rineloricaria. This is for me, more than enough scientific work, to understand that Hemiloricaria should be seen as a junior synonym of Rineloricaria. But still we see plenty of information around using Hemiloricaria as a valid genus name. But the majority of scientists that work with catfishes, and the catfish experts I talk with use Rineloricaria now.

In answering this question, I cannot be as sure as with the correct genus. Rineloricaria platyura was described back in 1849 from the Rupununi River in Guyana. Back in those days, the scientific descriptions were not as detailed as they are today. So, this fish was described with a few sentences in a bigger publication from an expedition in Guyana. Sadly, there were no pictures. However, the text itself does include some information on coloration and plate counts. This information is ambiguous when it comes to firmly identifying Rineloricaria sp. "Amazonia" as Rineloricaria platyura.

I have kept this fish for some years now and I simply love it. Mostly because it's a really big fish compared with many other Rineloricaria species. I also like the white tip on the spines that this fish has on the side of the body. This is the reason for the German popular name Weißdorn, meaning white spines [also the German word for the Hawthorn tree, got there in the end]. My largest male is about 15 cm in SL. And it has some large filaments in its tale, making it even more majestic.

I have also managed to breed it, and it's straight forward compared with other Rineloricaria species. They breed in an open tube, and it needs to be a little bigger than other Rineloricaria species use. My fishes did also deposit eggs on the bottom glass when I did not provide them with a tube, so they seem to be easy to breed. To raise the fry, you need to work a little bit harder compared to, for example, Ancistrus spp. fry. They need plenty of food and with that you also need to clean more often. I use a mix of small "dust" like food in the beginning and goes over to the same as I give the parents; granules and tablet. They seem to eat everything they get and I vary the source of protein in the diet.

Even if knowing the correct name for this fish seems complicated, the keeping of the fish itself is straightforward and highly recommended!