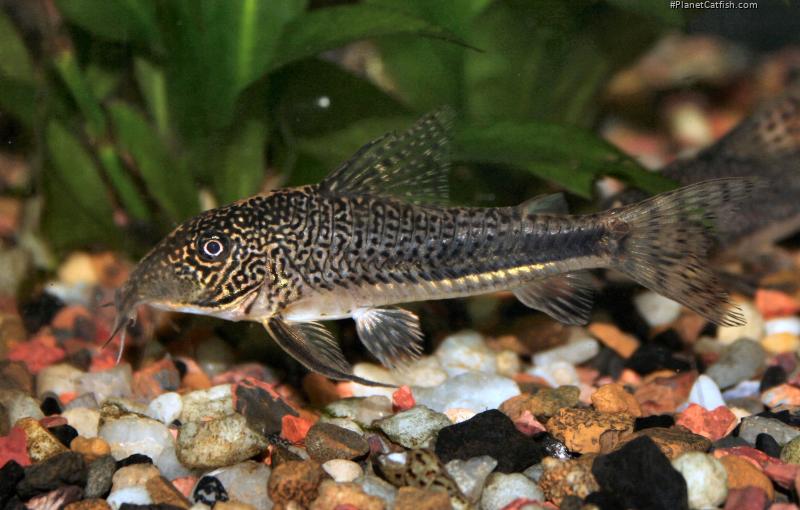 Affectionatly known as "the bearded one", Scleromystax barbatus (or Corydoras barbatus to give it its name at the time of this articles writing) is a fish often found on many a hobbyists wish list. It's certainly not another run-of-the-mill Cory and so to discuss it for this month's article we have enlisted the help of Ian Fuller. Ian has been keeping and breeding Corydoradine catfish for longer than I've been on this planet. His work is well known in catfish circles in the UK. Ian has been a regular photographer and, more recently, article writer for planet catfish. With the publication of his book (Breeding Corydoradine Catfishes) he joins the heavyweights of the catfish world. With that introduction, here are Ian's writings on Scleromystax barbatus, a cool cat indeed.

The Bearded Cory is perhaps the longest of all the known Corydoras species, with adult males attaining a standard length (tip of snout to the caudal peduncle) of 100 mm. In terms of mass there are one or two physically larger Corys but they just don't compete in terms of stature! Quite apart from size (and who says it doesn't matter) a couple of features have made this fish one of the most sought after of all the Corydoras species; males are simply outstanding when it comes to mature colouration. Their flanks and upper body are marbled black over a golden tan base, the whole of the underside from mouth to caudal is creamy, beer-head white. The male's mask like head is charcoal black with brilliant gold-leaf blotches and wavy lines, the most striking colour feature being a broad golden streak that runs down the centre of the head from between the eyes to the tip of the snout. 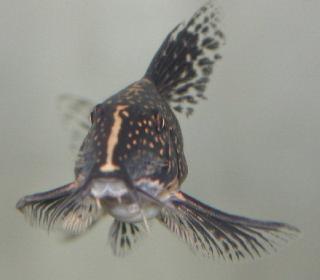 In the image shown of the mature male, you can also see the second major, this time more physical, characteristic of C. barbatus. These are the bristles along the cheeks on each side of the head. This is a feature that is only found on three other known Corydoras species, these are Corydoras kronei, A. de Miranda Ribeiro, 1907 Corydoras macropterus, Regan, 1913 and Corydoras geoffroy, La Cepède, 1803. While on the subject of taxonomy it is interesting to note that C. barbatus was once placed in the genus Scleromystax because of many differences from other described species of Corydoras. Male Corydoras barbatus have greatly elongated pectoral fin spines giving adults an ungainly yet impressive appearance. Additionally the second and third dorsal rays are also extended. This makes the fish more like Megalechis spp. than "traditional" Corydoras. 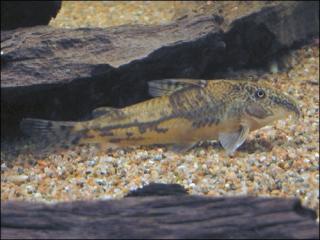 In comparison to the males, female C. barbatus are nowhere near as brightly marked. They have a light golden tan body colour, lighter on the underside, with large dark grey to black blotches which join together forming a wavy pattern along the flanks, from the head to the caudal peduncle. In C. barbatus terms there is no such thing as a bearded lady - females never develop the side facing growths.

Corydoras barbatus is one of a few species of Corydoras that are not what we would term as being truly tropical. Their natural habitat is the fast flowing rivers that empty into Guanabara Bay in the State of Rio de Janeiro. This is an area that is 22° south of the Equator and here the waters are a little cooler, at times temperatures of below 60°F are quite normal. In the aquarium these fish are best maintained at temperatures around 60° F. If Corydoras barbatus are maintained at the normal so-called tropical temperatures, around 75° F., they become stressed and usually will not survive for any length of time.

The water need not be heated at all (given you live, for example in a heated, European or North American household) provided it is not going to be subjected to periods of extreme cold (below 50° F) for any length of time. In truth, a daily variation in water temperature would be more natural than a constantly fixed temperature. A power filter, either inside or an outside canister (which I prefer), should be used for two reasons; firstly to keep the water perfectly clean and, secondly, to create a reasonably strong water flow around the tank, emulating to a degree the running water in their natural environment. Weekly 20% water changes, using slightly cooler water than that in the tank would also be very beneficial.