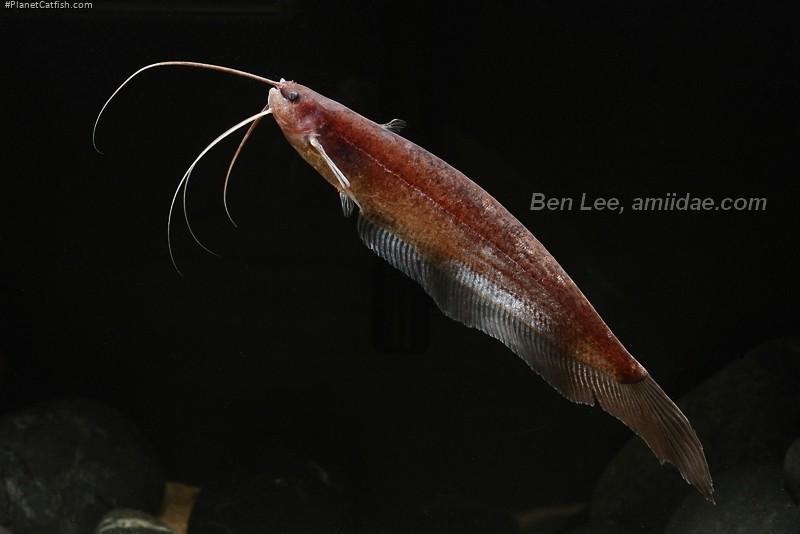 Heok Hee returns with another, very welcome, catfish of the month article while your webmaster is running around like a headless chicken in the attempt to move house.

Unlike their more famous cousin, the glass catfish (Kryptopterus minor), many species of the Siluridae are not commonly encountered, or well-known in the aquarium trade. One such rarity, the Asian leaf catfish (Silurichthys indragiriensis), is the subject of this month's article.

The two species inhabit different habitats, and thus have different water requirements. The Asian leaf catfish (S. indragiriensis) is found only in blackwater habitats such as peat swamps, where the pH of the tea-colored, tannin-rich, extremely acidic water can dip to as low as 4, whereas the Hasselt's leaf catfish (S. hasseltii) is a denizen of (whitewater) forested streams with a more typical (for tropical fishes) pH of 5 to 6. It is not particularly easy to tell the two species apart, but the Asian leaf cat has a much longer caudal fin and is generally darker brown in color.

A relative rarity in the aquarium trade, the Asian leaf catfish is only encountered occasionally as anincidental import. Ideal for the community aquarium, they are shy and retiring and get along well with almost any other community fish. Unlike glass cats, leaf catfishes do not spend all their time swimming in midwater. During the day, they rest by lying on their sides under the protection of cover, a relatively unusual position for resting since most other silurids rest either by hovering in midwater or lie on their bellies. They swim with very un-silurid, sinuous movements of their bodies - somewhat reminiscent of eel cats. They are also fairly gregarious fish and are often seen schooling together.

In the wild, the diet of leaf catfishes consists mainly of terrestrial insects that have fallen into the water; however, in the aquarium they are catholic in their choice of food and will readily take most live, frozen or processed food. They have hearty appetites and, given the chance, will eat to the point of bursting. To this date, no aquarium breeding has been reported, but it is possible to sex them by looking at the pectoral spines. The males have more prominent serrations on the pectoral spines than the females. This form of sexual dimorphism is common in many other silurid genera (e.g. Ompok, Kryptopterus), though the purpose of the serrations in the pectoral spines of the males is not clear. Females are also generally larger.

Because of the nature of its habitat, the Asian leaf catfish does best in blackwater tanks, although they are known to do fairly well in regular acidic water tropical systems. Good filtration is essential because they are very sensitive to changes in water quality. The slightest sign of deteriorating water quality rapidly causes fatal infection, which is manifested as sores on the body and mouth.

Although a rather dull-colored fish that is not seen much during the day (a description that will fit a large majority of catfishes), the Asian leaf catfish still provides plenty of challenge for the catfish connoisseur and is a fascinating addition to any blackwater tank. 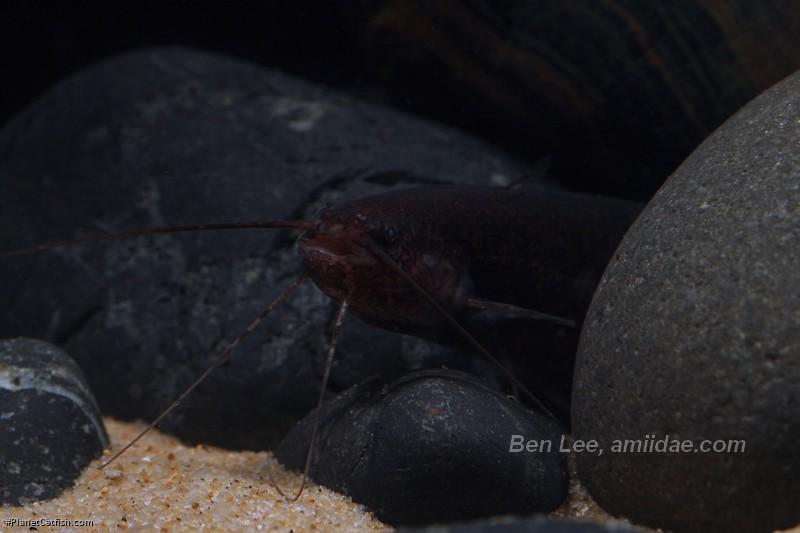