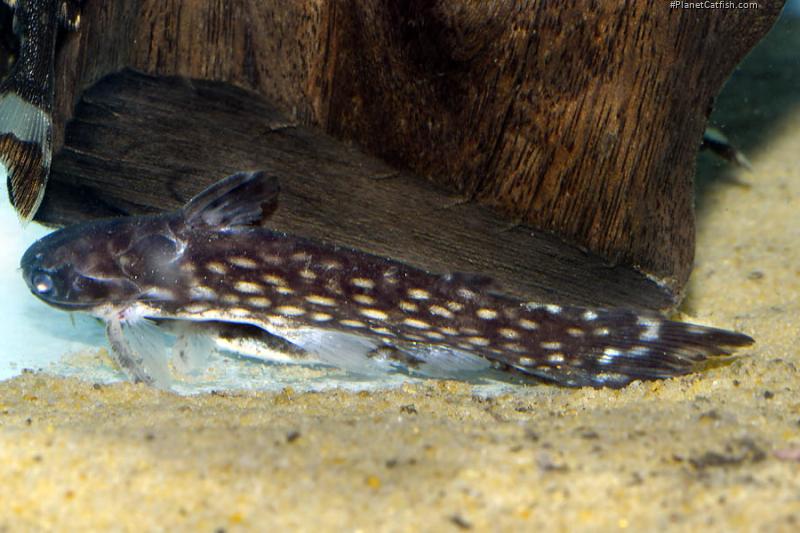 It's 2009, and so, firstly, best wishes from the PlanetCatfish.com team for the year ahead. It promises to be an excellent one for catfish fans, with no slow down on the description of new species and the documentation of new breeding successes. However, as always when contemplating the future, it's wise to consider the past. Marc Stabel does this while talking about his extensive and continuing experiences with a fish that's been in the hobby for decades, but is really quite uncommonly kept.

It must have been about twenty three years ago when I first encountered this species in a German fish store. Although the two specimens weren't exactly cheap, they seemed nice assets to my auchenipterid collection, which at the time consisted of only one species, Auchenipterichthys coracoideus. Not much of a collection, is it? However, the number of auchenipterids grew and so did the Tatia. They turned out to be a pair and did very well for some years until one of my Ageneiosus magoi regarded the male Tatia as food and ate it (which was an achievement in itself). After that I had to rescue the smaller auchenipterids and I remember that the female T. intermedia went to my cousin, who kept her for while. Within a few months I decided it was time for something new and sold all remaining woodcats.

Tatia intermedia is a bullet shaped species. Juveniles and adolescents show an off-white pattern of roundish dots on a black body. In adults this pattern becomes vague or disappears almost completely, with the exception of the dots in the dorsal and caudal. The belly is white in both sexes. Adult males are much more slender than females. The snout is rounded with a terminal mouth. This species has an outstanding recognition feature in the nuchal horns, because these beige-coloured skull parts (just below the dorsal spine) can be seen very well, especially in adults. T. intermedia is also one of the larger Tatia species with a length of 13 cms (SL).

It was around 2002 when I got fed up with all the glitter and glamour of Malawian cichlids and seriously started thinking of going back to a catfishes only tank. It should be no surprise that Auchenipteridae would become the main inhabitants. Then I faced a rather forgotten problem: where could one obtain any woodcats, besides Japan or the UK? I was used to being able to buy fishes on every street corner, but now I had to do some searching again. Not through the internet (I hardly used it then for it was too expensive plus the telephone was constantly engaged) but in the old-fashioned way: get into the car and visit shops throughout the Netherlands and the western part of Germany. On one of those trips I came across Tatia intermedia and I remember being very happy about it. It was after all only the second time I saw them for sale. “I'll take them all”, I said to the LFS owner without taking the trouble of counting them, “for it may be a while before I'll encounter another woodcat species”. There were fourteen T. intermedia and luckily nicely priced, otherwise I had made a complete fool of myself by having to tell the man I couldn't afford all fourteen specimens.

On a side note, when I rang that man a few months later on to ask if he had received other woodcats, he told me the fish I bought should have cost 13,95 euros each, while I bought them for 3,95….. That was the same shop were I bought my Tatia gyrina two months ago and although this time I did count them and had already decided not to take the whole bunch, he insisted on me having all (nine) specimens. Well, how could I ever have refused?

Tatia intermedia is very likely the most widely distributed member of its genus. It can be found in the North-Western part of South-America, from Colombia and Peru to Belem (Brazil) and including the Guyanas (French-, British- and Suriname) as well. Hence its common name Novia (or Tayta) common. The last few years it has become a species that is imported on a fairly regular basis. Prices may vary, but on the whole it is not regarded as an expensive fish.

The T. intermedia, which were then about 3 cms, were put in the tank for small to medium sized auchenipterids. They turned out to be very rapid growers, mainly because they weren't as timid as the rest when being fed with lights on. Thus, I was able to distinguish their gender within four months and it turned out that I had three males and ten females (one specimen had died). With thirteen ever growing Tatia I needed some extra space, so a new tank was set up for the medium sized auchenipterids.

On top of that I received a call from an LFS that they had received three “Tatia galaxias”, which they had especially ordered on my behalf because that species was on a wish list that I made two years earlier in a desperate attempt to obtain at least a few different woodcats. I already had a feeling that these had to be T. intermedia. I had seen the wholesaler's list - where they were named T. galaxias - but the fact that they were not wild caught did ring some alarm bells. And indeed, they were T. intermedia. And again I couldn't refuse, because after all the LFS had done its utmost to please me and I felt I couldn't let them down. That made 16….

T. intermedia is often confused with T. galaxias. Both species have dark base with light spots, but on T. intermedia spots are off-white and fade with age. In T. galaxias the spots are (and remain) bright white and the body is velvety black. The body shape of T. galaxias is also more slender.

Tatia intermedia is a greedy feeder with a keen interest in all prepared and frozen foods. Bottom or surface, it doesn't matter. Thus making it a strong competitor amongst other fishes for food, especially because they prefer the joy of food over the disadvantage of lights. They are always first — as already stated above — and will leave little to nothing for other fishes. Bearing that in mind it's probably best to combine them with larger, non-aggressive tank mates. Also — because one has to feed extra — see to regular water changes and filter cleaning to avoid poor water conditions.

Plenty of hiding places should be provided, as well as swimming space. The bottom of the tank is best made of sand and/or small gravel. T. intermedia will not damage plants. As always when auchenipterids are concerned, I strongly recommend not combining them with aggressive fishes. Also, avoid fishes that are too small and risk being eaten by "accident".

These last trio seemed to grow even faster and very soon I could transfer them to the medium tank with their conspecifics. That turned out to be a bad idea: there were simply too many specimens in a relatively small tank. Males started to fight and females can be pretty grumpy as well amongst each other. I noticed more and more specimens with injuries and when I saw a male with a completely ripped off right pectoral spine I knew I had to do something to avoid even worse scenarios. I split the group in half (keeping two males and six females myself) and hoped that things would improve. It did, but only after I had lost another two females and one male. At the time, with a group of four females and one male, things are going well. Sometimes the females still quarrel, but no serious injuries have occurred. What I do see however, are the scratches and other small damages (which heal very quickly) caused by matings or mating attempts. This species is a relatively easy breeder. I regularly see clutches of eggs — which remain unharmed by the parents and other fishes - but after the fry have hatched they are no longer safe from all the scavengers in the tank. The eggs are kept together by a jelly-like substance and hatch within three to four days. To repeat, if you don't want the fry to be eaten it's wise to put them in a separate tank.

Being a true auchenipterid, sexing of Tatia intermedia is rather easy: adult males have a genital papilla for internal fertilization, are much more slender than the larger females and have an elongated upper caudal lobe. However, parts of this sentence are not as clear as they seem. Some scientists believe that the genera Tatia, Glanidium, Centromochlus and Gelanoglanis do belong to the subfamily Centromochlinae based on the fact that they aren't able to fertilize internally.

Yet that causes some questions, to say the least. Several people have witnessed the deposition of fertile eggs without a male specimen around. This has not only been witnessed in Tatia intermedia, but also in Centromochlus perugiae. Being no scientist, I can only come up with an idea of how they do it. I personally think that the genital papilla of the male is supported by its anal fin and when pressed against the genital opening of the female the sperm is inserted. This would have no implications for the subfamily Centromochlinae, because one might presume that all members fertilize in the same way: internally, yet slightly different from Auchenipteridae.

To end this CotM, Tatia intermedia is a rewarding catfish. If you're ever able to obtain some, give them a try. They will not let you down. But mind you: not too many!