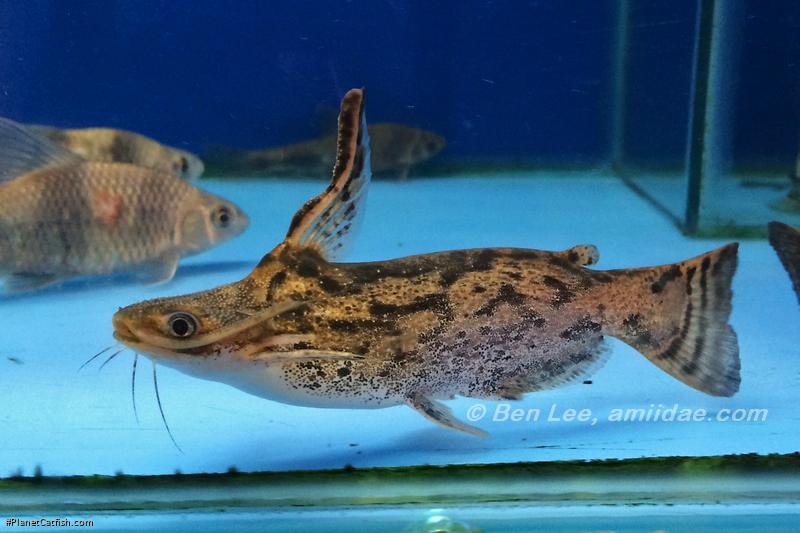 Fisher's Woodcat, Trachelyopterus fisheri, is not a very common species. So I was very pleased when I encountered three specimens in a shop in Amersfoort, here in the Netherlands. At first I purchased a pair together with one Trachycorystes trachycorystes, but due to compatibility problems I had to return the latter and therefore came back home with T. fisheri number three, which was a female.

There are few problems with regard to discerning gender in this species. Males have a genital papilla, thickened maxillary barbels, spawning tubercles on the barbels and on top of the head. The most striking masculine feature is, however, a curved and enlarged dorsal spine which can also be moved up and forward. Their nape is bent upwards, as can be seen in Tetranematichthys and Ageneiosus spp. Females grow (much) larger and, at least according to reference books, should display a plainer colour pattern, but I don't agree on that. Although my females are about 25cm at the present time, they still have a very nice sort of blotched pattern which make them quite invisible in a tank full of bogwood.

T. fisheri is the largest Trachelyopterus species discovered to date, yet it is amazing how gentle this fish is. It seems to glide through the water and never displays the hastiness which is so typical for other members of its genus. As a matter of fact - although being an amateur - I think this species comes very close to Ageneiosus with regard to behaviour and looks. Take for instance the nape and the enlarged dorsal spine of male T. fisheri. No other described Trachelyopterus species have these features to this extent. Also they like to swim somewhat head-up, another feature they have in common. Of course, there are differences as well. The mottled wood-like pattern is not apparent on any known Ageneiosus (but it is on Tetranematichthys!), the structure of the mouth is different; terminal in T. fisheri, inferior in ageneiosids and I won't even mention the scientific differences, by which I mean internal things, fin ray counts etc. For it should be clear that there are scientific reasons that these fish do not belong to the same genus.

This woodcat is indeed a social fish. Some weeks after I had bought them one female became a little grumpy towards the other two. This lasted for several weeks and consisted of grunting and trying to push them away. After that period I have not heard or seen this behaviour repeated. They will happily share their hiding spots with other fishes. Yesterday I introduced some new woodcats in the tank, which for obvious reasons wanted to find some dark place. Whereas the Jaguar Cats, Liosomadoras oncinus put up a fight to defend "their" piece of wood, the fisheris didn't mind their space becoming very crowded all of a sudden.

These fish have a voracious appetite and can look like barrels at times, especially the females. So, when kept with other fishes one must see to it that there is enough food for every fish. That implies that the water conditions and filteration should be taken care of properly. In my 720 litres tank (200 x 60 x 60 cm), I replace a quarter of the contents every month. Two Eheims (2228 and 2028 Pro series) take care of the dirt and are cleaned every month as well, but never at the same time as the water replacements. If kept under fair conditions, these fish are very hardy and hardly liable to diseases.

Normally these woodcats will show up when being fed, except maybe when you have to do some things in the tank (rearranging, cleaning) shortly before. However, they are certainly less visible when compared to when I first got them. Perhaps the old woodcat rule applies: the larger and older they get, the less you get to see them. I keep mine together with a bunch of other Auchenipterids and twelve Exodon paradoxus, which are not only beautiful, but also useful as dither fish. At the end of this article I state that Auchenipterids in general shouldn't be kept with aggressive fishes, so you might think my combination is strange, to say the least. However, the characins do not harass my catfishes. For some reason or another, they apparently know that the catfishes do not have scales. They may chase the cats when they are swimming around but actually never actually bite.

T. fisheri has already been bred in captivity and I wouldn't mind them breeding here as well. I witnessed some activity in this regard, but the male was rather clumsy in trying to clasp his female, which swam off like nothing had happened. Still I have some hope it will actually happen one day and if so you will be the first to know. For someone who is planning to buy this species and to end this CotM article, here are - in short - a few essentials: