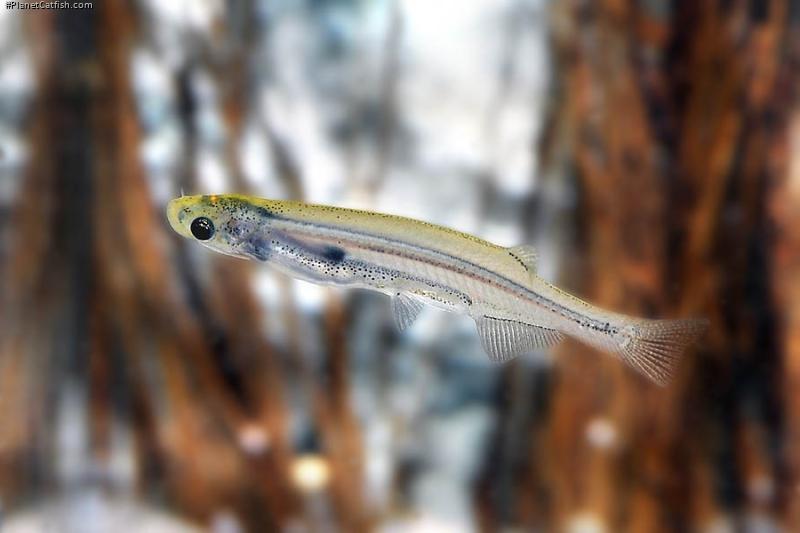 Nano aquariums, along with the word stunning, are all the rage at the time of writing. Here at PlanetCatfish.com we are, it has to be admitted, perhaps not among the most fashion conscious. However I write this month's short CotM article about a rather short fish that could be fashionable but, thankfully, I can avoid increasing the over use of the word stunning to describe it.

Indeed, if you print out this species' name, Tridensimilis brevis, in even quite a small type face, that printed name would be twice as long as the physical fish. This then is a real nano catfish and its addition to a nano tank will not strike fear into the hearts of cherry shrimp or Riccia (it's a plant, I know it doesn't actually have a heart, but you get my point) - this fish is plant and shrimp safe. These dwarf parasitic catfish are really unusual additions to a small tank and their small mouths will not eat adult shrimps or plants.

Being as small and transparent as it is, it is actually noteworthy that it came to anyone's attention; it is testament both to this fishes wide distribution and the diligence of the Eigenmanns that described it over 120 years ago in 1889. It rarely comes to aquarists attention either and is almost exclusively found for sale as a by-catch with species such as Corydoras pygmaeus or similar looking mini characins. It's easy to overlook even in aquaria as it is a mid water always moving clear fish - again something that endears it to those running the smaller aquarium.

Don't let the parasitic common name worry you, that refers to the family name and while this species is clearly a carnivore (most easily fed on chopped bloodworm or similar that can be seen in their stomach through the fishes transparent body), it will be safe with .5"/1cm fishes or upto 1"/2cm. There is the possibility this species will begin to become parasitic with fish larger than that, although I did not observe this.

In summary, the perfect curio for a pretty nano tank - your challenge is to find them.