Did you know fantastic help is an anagram of Planet Catfish? This forum is for those of you with pictures of your catfish who are looking for help identifying them. There are many here to help and a firm ID is the first step towards keeping your catfish in the best conditions.
Post Reply
8 posts • Page 1 of 1

are these corydoras trilineatus? If not ... what could they be? I saw a picture in one of the japanese websites which listed this as C. Trilineatus cf (julii) {or something like that} Hope to clarify this. Hehehe ... I suppose they are.

when I bought them a month ago ... I was hopping they would be julii as they were all spots. As they grew, the spots joined to become lines. Is this commonly observed? (or was it wishful thinking on my part. heh.)

thanks!
Philtre's stash of corydoras
stash I [img:41:28]http://www.linkclub.or.jp/~tarot/icon/cory.gif[/img] stash II 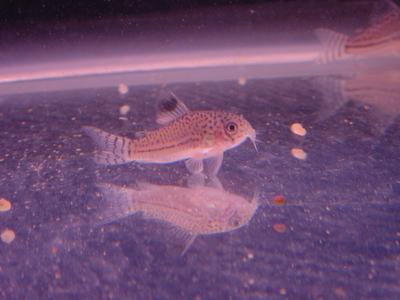 more pics can be found on here
Philtre's stash of corydoras
stash I [img:41:28]http://www.linkclub.or.jp/~tarot/icon/cory.gif[/img] stash II

I have had a look at all your pictures and they are in my opinion C. trilineatus They are constantly being advertised/sold as C. julii but C. trilineatus come from Peru and C. julii come from eastern central Brazil.

Is juli hard to find in UK? if so let me know if you want some sent to you.because here in US there the most common cory you find .also I've been wanting to find some one to send fish back and fourth with alot of common stuff there I can't find over here

what's the matter?---cat got you'r tongue.

I didn't get them as julii.

The retailer was old, couldn't see well, asked him what they were and he couldn't really see. But it's fine. They're lovely! They used to have julii stock, was hoping that I could get lucky.

How would you differentiate between a young julii & a young trilineatus?

But it's Singapore here where I am. I am like dying to get my hands on juliis though! It's absolutely rare here. Well at least I haven't seen one yet! (I've just started taking a more serious interest in corys about 2 months ago) But the thought of that long long journey for these little fellas is scary! To me at least. Heh.
Philtre's stash of corydoras
stash I [img:41:28]http://www.linkclub.or.jp/~tarot/icon/cory.gif[/img] stash II

I'm not convinced I've ever seen a true<I> C. julii</I>, even though that is how they are labeled . It seems to be a common name, not a common fish.

Oneoddfish,
Dave is correct. All of those C. julii you see in the states are actually C. trilineatus coming out of Colombia and Peru.
"My journey is at an end and the tale is told. The reader who has followed so faithfully and so far, they have the right to ask, what do I bring back? It can be summed up in three words. Concentrate upon Uganda."
Winston Churchill, My African Journey
Top

This C. trilineatus / C. julii thing has been bugging me for years. The only way to prove which is which is to know exactly where they were caught.

When viewed head on C. julii are quite slim and not at all stocky looking like C. trilineatus. Exporters in South America use the name C. julii because they get more money for then than they do for C. trilineatus.