All posts regarding the care and breeding of these catfishes from South America.
Post Reply
7 posts • Page 1 of 1

Hello everyone, I have one 20gal planted tank just for a group of about 20 C.Hastatus and they spawn regularly. There are always frys showing up in the tank but they rarely could grow up to adults. I probably have over a hundred of new frys produced in a year and only about less than 5 could make it to the adults.
Occasionally, I collected some of the eggs and successfully hatch them in a smaller tank that I also used as a nursery for other type of fish frys with very high successful rate. (BTW, even my Daphnia culture could survive in the nursery tank and they are one of the food source for my frys)
But, no matter how hard I tried, the C.Hastatus frys just died off completely.
Does anyone have high successfuly rate in raising Hastatus frys?
Top

Hi,
yes, some years back I kept and raised quite good numbers of them without any big problems.
First days I kept them in a small plastic boxes swimming in the parents tank and added java moss and tiny quantities of detrius (from the filter). After few days when they started to feed on brine shrimp naupli I moved them in a small aerated glass box:

Formless wrote: ↑Wed Feb 20, 2019 11:48 pm Hello everyone, I have one 20gal planted tank just for a group of about 20 C.Hastatus and they spawn regularly. There are always frys showing up in the tank but they rarely could grow up to adults. I probably have over a hundred of new frys produced in a year and only about less than 5 could make it to the adults.

I've lost my colony in the (UK) summer while I was away in New Zealand for six weeks. I don't know quite what happened, but I assume it was an over-heating issue.

Before that I'd had them for about twelve years and they had maintained themselves and provided a continual trickle of fry. I started with five and added another nine a few years later, I had about fifteen adults at their peak (it is only a 2' tank), and probably fifty to hundred fry swapped on, so not a great survival rate. Various other fish were in the tank at various times, Dicrossus maculatus, Apistogramma agasizzi, Carnegiella strigata, Copella arnoldi, Red Cherry Shrimp and probably a few others. 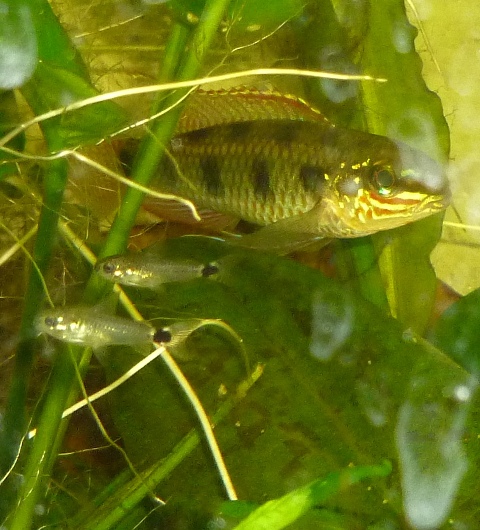 I used the method suggested by @Apistomaster (Larry Waybright) on this forum <http://www.planetcatfish.com/forum/view ... mp#p259453>, a tank with a large number of ceramic rings on the substrate and a layer of plants. I keep really heavily planted tanks, which is partially why I don't know how many fish I had, and didn't make more of an effort to retrieve the eggs/fry.

I didn't specifically feed the fry, but I fed micro-worms every day (to the adult fish), other live food and the tank had a lot of structural leaf litter and moss.

The puzzle thing is that all my Hastatus frys could live on for few weeks or even a month before dying off, while everything else inside the nursery tank continue to flourish. If there was any problem with foods or water parameters, then they wouldn't even make it thru the 1st week. But, they were happy and even grew bigger for a few weeks. Then, suddenly you found them struggling to swim up and eventually sinking down motionlessly to the bottom before dying away.
For the nursery tank, I keep green water with a small culture of daphnia, micro worms, couple nerite snails, few Neo shrimps, flame moss,..etc. I am trying to keep it just like a natural environment as possible. My Margaritatus Celestial Pearl Danio frys have over 90% survival rate in this same nursery tank. If my Daphnia culture could thrive there, everything else should be too.

Formless wrote: ↑Fri Feb 22, 2019 1:04 am .......The puzzle thing is that all my Hastatus frys could live on for few weeks or even a month before dying off, while everything else inside the nursery tank continue to flourish......

Not sure, it sound a perfect set-up, do you add dead leaves? I think they are really important in generating small live food items.

Other than that do you have a Grindal worm culture? I feed Grindal worms and "Astax" Red crumb as well, just a small amount, but every day.

The other option would be "Dero" or Microfex worms (Dero digitata), but I've never tried culturing these. There is an article on "Micro live food culture" in Amazonas 6:6 "Blue-eyes" Nov. 2017 by Hans Ruhrmann.


Formless wrote: ↑Fri Feb 22, 2019 1:04 am My Margaritatus Celestial Pearl Danio frys have over 90% survival rate in this same nursery tank

Are they in there at the same time? If they are? it might be competition for food.

Yes, the planted tank mulm and organic debris is essential to the frys and I always make sure there is a thin layer of mulm there for everyone. Few times, the C.Hastatus frys have the nursery tank all by themselves and sometimes they share it with Margaritatus frys. The Margaritatus frys are top swimmers and they never go near the Hastatus frys at the bottom.
Since My Hastatus adults keep producing eggs, I just have to figure this out by trials and errors.
I have a 2nd nursery tank with identical parameters and setup, minus the micro worms. I can't completely trust the worms, especially when the Hastatus frys are still too little & fragile. I have a new batch of eggs just hatching there and will see how it goes....
I also found an article about the same dying off experienced by other hobbyists.
https://www.scotcat.com/articles/article55.htm
Top

You could try Rotifers as a first food source, either by culturing them or by squeezing a filter sponge into the moss. If you can buy a culture Brachionus calyciflorus is the one you want.

Last time I looked it was difficult to obtain and expensive (looks like it still is), but Michael Hellweg's book(https://www.amazon.com/Culturing-Live-F ... 0793806550) is very useful.