Did you know fantastic help is an anagram of Planet Catfish? This forum is for those of you with pictures of your catfish who are looking for help identifying them. There are many here to help and a firm ID is the first step towards keeping your catfish in the best conditions.
Post Reply
12 posts • Page 1 of 1

I purchased a pleco from PetSmart a few weeks ago and I’m hoping that this awesome forum can help me ID him. He was in a tank labeled as "Common Pleco" but while the rest of the pleco’s in the tank were all very dark with the normal “Common Pleco” markings my guy was more marbled with light areas. I was immediately drawn to him and had to bring him home.

He’s about 3-4 inches long with this awesome light and dark marbled look; also, he has 12 rays in his dorsal fin. One other thing that is different about him is that his two nostrils are longer than I’ve ever seen on a common pleco.

I really appreciate all of your help!! Mostly because I’d love to see if I actually have a different type of pleco; or the bigger concern, if I do have a common pleco what would cause the coloring issues and how can I help him?

As for your new pleco. You say it came from Petsmart. In my experience, they typically sell Pterygoplichthys pardalis that have been farm bred and raised, so the likelihood that you got a different species is very small. There can be real differences in color among the juveniles, although I suspect those are due to condition, health, tankmates, etc., so I would be shocked if that carries forward as yours ages.

The only element of your post that makes me wonder at all of the ID is that I can see a partial view of the fish's belly on the glass, and it appears to be lined instead of spotted. In adults, a vermiculated/lined belly would indicate Pterygoplichthys disjunctivus rather than P. pardalis which has a spotted underbelly. However, I don't know if the vemiculations (vs. spotting) is something that shows in juveniles also, or only in adults. So while perhaps yours is P. disjunctivus, I suspect it's P. pardalis but the color pattern still needs to "mature." Of course, in farmed situations, there's also the change that the parent stock was not carefully sorted when created, and the fry might be a hybrid of the two species.

Either species will have the same care requirements, so that's good. They both get big, so be ready for that. Perhaps you can post more photos as the fish ages a year or so, to see what the belly looks like later.

Thank you very much for your response!! That makes a lot of sense that a chain store like PetSmart would get their fish from large breeders. And I'm also really happy to hear that even if I do have a Common Pleco or Pterygoplichthys pardalis that he's not sick or too stressed. I will definitely monitor his growth because I've seen how big they can get and I want to find someone now that may be able to give him a good home in a few years. Ooorrrrrr.... that may be the perfect opportunity to get a much, much bigger tank.

Also, please don't think that I'm questioning you but after going through a ton of the awesome info on this site I stumbled across the Pterygoplichthys scrophus https://www.planetcatfish.com/common/sp ... cies_id=80 that had similar markings. Is there any possibility that mine could be this variety?

pgallagher wrote: ↑
Tue Feb 11, 2020 6:08 pm
Also, please don't think that I'm questioning you but after going through a ton of the awesome info on this site I stumbled across the Pterygoplichthys scrophus https://www.planetcatfish.com/common/sp ... cies_id=80 that had similar markings. Is there any possibility that mine could be this variety?

Absolutely not put off if politely asked if my ID is wrong... (I think I have about a 30% failure rate anyway.

As far as Pterygoplichthys scrophus, absolutely not that. The photos of your fish, in my view, show something that isn't even close to P. scrophus. Scrophus has a rich orange-rusty-brown base color that has no comparison to either Pterygoplichthys pardalis or Pterygoplichthys disjunctivus. Also, scrophus doesn't have markings on the belly like your fish. Below is a photo from the P. scrophus CLOG page showing its belly. 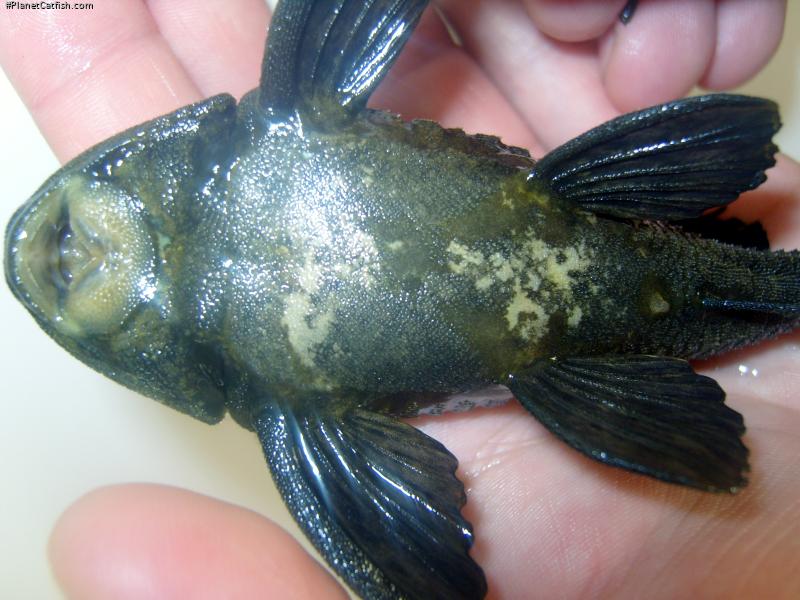 "So many catfishes, so little time... and space... and money." - I said this after visiting Pier Aquatics.

P. scrophus has large nasal flares and, once you know it, looks really quite different. Eric's ID is spot on.

I made some updates to my tank over the weekend and was able to get a few more good looks at my pleco that I've named "Frank." It just seems to fit him, as he feels like the adult of the tank. Nonetheless, I added a few pieces of pacific driftwood, which I also added some moss to parts of the branches. I've read that driftwood is good for plecos as they need the fiber for their diets. I've also been giving him slices of cucumber every night, along with the Fluval Bug Bites https://fluvalaquatics.com/us/product/b ... ge-plecos/ that I put in once I turn the light off at night.

My concern is that he seems to be getting even lighter in color and I wanted to get all your opinions to make sure that he's doing okay and this is just him adapting to his surroundings. Thank you for all of your help!!

I'm not concerned by that photo. Colors still look normal.

However, what about your driftwood and moss? You called the wood "pacific driftwood." What kind of wood (if you can tell) and where from? On fresh or just dried wood, it's said that wood from conifers is dangerous to fish health due to certain resins they contain. And real "driftwood" (i.e., wood that's been floating in water) can be saturated with salt if it was floating in saltwater, and that's not safe either. On the other hand, old freshwater-soaked wood, even from conifers, if soaked to the point that it is washed essentially clean of resins, is usually safe. So just be careful, and if you have any concerns, just change out the wood for something from a known source.

Thank you!! That's great to hear!

And the driftwood I got from my LFS, the brand is Aquaglobe http://www.aquaglobe.com/html/woods.html. The Pacific wood is a little more than halfway down the page. I had them sitting in the tub for about a half-hour before I added the moss; both pieces that I got sank right away and never stained the water too.

And for the moss one is Susswassertan Moss and the other looked like Marimo moss that was in pieces and not one big ball.

Here's the new tank set up too:

Okay, great. Yes that explains everything and all sounds good. I know people, myself included, who wander along shorelines and pick up wood (where it's legal). Then the reward may be great for an awesome piece of wood, but the risks can be high.

Susswassertan and Marimo mosses are fine, although if attached to wood, may get chewed on a bit. No harm to tank though.

Enjoy your fishes,
Eric
"So many catfishes, so little time... and space... and money." - I said this after visiting Pier Aquatics.

Thank you very much Eric! That tank is slowly taking shape of what I pictured when I started.
Top

The addition of the driftwood and his daily cucumbers have definitely made an impact and Frank the pleco is looking much better!! His color seems to be stronger and he's definitely been more active too. Here are some photos from last night.

Thank you again for all of your help!
Top