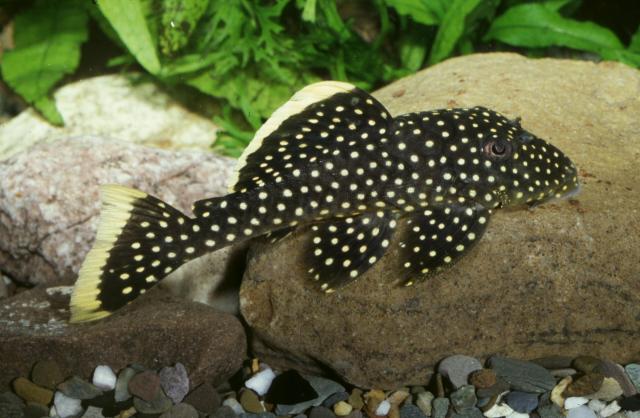 Introduction
For some time now, the Golden Nugget catfish of the genus Baryancistrus has been one of the most frequently imported L-number catfish. This doesn’t mean however that these are by any means an easy fish to look after. Unfortunately, in the Aquarium hobby industry, with only a few exceptions, it is the attractive colouring, the unusual body shape as well as the price which decides whether a species is successful or not. Because they live in regions of shallow water, Baryancistrus are comparatively easy to catch in larger numbers and so can be sold relatively cheaply. Only very few people who buy these fish are aware of the fact that these are very demanding fish which are really only suitable for the community tank in limited conditions.

The home of the “Golden Nugget” is the Rio Xingu, a southerly freshwater tributary of the Amazon in north east Brazil in the state of Para. Since the Xingu is the home of so many gloriously coloured catfish, it has long been my greatest wish to visit this river myself one day. In September 2004, I finally had the unique opportunity of accompanying collectors of the export station of the Garbsen Zoo and Ornamental fish Importers Jens Gottwald to fish in the Rio Xingu. Equipped with my fishing permit from the IBAMA, the Brazilian Nature Authority which you must apply to in Belem, we made our way out from Altamira in the boat to the collection areas of the “Golden Nugget”

There are three forms of Baryancistrus in this river, with four L-numbers. The species L018, which has also been given the name of L085, is found in the immediate vicinity of Altamira. The L085 is the adult form and L018 the juvenile form. The finer whitish-yellow spotted Baryancistrus sp. (L081) is found a little further south in the Rio Xingu and the home of the larger yellow spotted L177 lies still significantly further south, roughly where the Rio Iriri flows into the river. Essentially, you could easily take the L018 or L085 for either of the other two “Golden Nuggets” since they resemble each other almost entirely in ecology as well as care requirements. Also worth noting is the fact that all three Golden Nugget Catfish from the Rio Xingu are significantly varied in their markings. The greatest variation is in L018 in which there are finer and coarser flecked specimens with either very broad fin bands or almost non existent ones, and this seems mostly to depend on the area where they are caught. With increasing age the fin bands of this species disappear more and more.

The Ecology of the “Golden Nuggets”
Golden Nuggets are mostly inhabitants of shallow waters, since only there do they find in abundance the food which they have specialised in eating. The shallow areas of the Rio Xingu with their strong currents have a characteristic rocky bed which is thickly covered with algae biofilm (the German word, “aufwuchs” is often used even in English articles to describe this rock covering). In the region of the Altamira there are countless giant islands in the Xingu which one could easily take for the opposite bank and which alter the direction of the flow of the river very strongly. As a result, in the very narrow stretches the speed of the flow is greatly increased, while in other areas it is fairly slow. The slower the flow, the fewer golden nuggets are found, since in such places a sediment accumulates on the rocks so that the aufwuchs cannot establish itself. During the day the river seems at a glance to be almost free of catfish. Only when you go snorkeling and turn over the rocks or look into the cracks between the rocks can you see how many catfish are found here. In the Cachoeira Cutevelo not far from Altamira, in one of the favourite rapids of the fish collectors, we covered a group of three rocks with a large net and caught about 20 adult L018s of over 30cm length out of the cracks in the rock, which was a good indication of the concentration of the fish population here. It’s no surprise then that you often come across the adult fish in the market in Altamira. The fish are a popular food source among the poorer people. The massive population and the relatively easy capture of these fish are also responsible for the fact that these beautiful fish are so cheaply available in the aquarium trade, while the species which come from the deeper waters (e.g. Pseudacanthicus sp. L025 and Ancistrini sp L082), which are expensive to catch because of the costly diving involved, fetch a significantly higher price on the “market”.

I was not too astonished when Abel, one of the collectors accompanying us, suddenly began to prepare the surplus adult Golden Nuggets not earmarked for export to Germany for eating. With a machete, he made a cut between the pectoral fins to the abdomen. A second cut was made from the middle of the first in the direction of the anus. Now the underside was open and the intestines were removed. As expected, the intestinal tract of the L18 was extremely long; the stomach on the other hand was small. When spread out, several meters of the intestines appeared filled with a greenish brown mass: aufwuchs. The specimens earmarked for export had to have a water change after only a very short time. They began of course to offload the contents of their gut so that the water very soon turned onto a brown “soup”. In the collecting station, even after two days the water had to be changed very often until the fish had completely emptied their bowels. This shows just what an astonishing amount of nourishment from plant matter these fish need.

Amongst the mature Golden Nuggets naturally there were numerous sexually mature females, which can be easily distinguished by the sacks filled with yellow eggs on their abdomen. At a guess each female was carrying 300-400 yellow-orange eggs. Now it was also possible for me to examine the secondary sexual characteristics of these fish more closely. What was noticeable was that in males and females there was a pronounced growth of the thorn like “skin teeth” (Odontodes) mostly behind the gill cover. The difference in number and length was also very small. A definite distinction between the sexes was possible though because of the body shape as well as the length of the pectoral fins. The males have a very much longer and more massive head and longer pectoral fins.

The observations just described from the wild show clearly that these yellow seamed catfish, and I could also include the species L081 and L177 in this, are very demanding fish to keep. That they can reach a length of up to 30cm means that a large tank is a basic condition for a sustained care over several years. I have also found through experience that the males can be very territorial and will fight vehemently when they see each other. Anyone wishing to keep more than one specimen in one tank must make barriers and plenty of hiding places for the underdogs out of rocks or wood. Then there is also the regular water maintenance. A suitable water temperature of around 27-30 C as well as good supply of oxygen are also important. For the care of these fish a medium hard slightly acidic to neutral water is ideal, just as it comes from the mains supply in many places. Unfortunately, the aufwuchs so loved by these fish cannot grow in our aquariums in sufficient quantity, and so we are forced to provide a substitute food. Here the fish prove to be not very fussy and after a short time develop into real omnivores. Anyone who wants to keep these fish for years should take care that the nutrition of the fish is predominately vegetarian and as much a possible avoid feeding them only with animal based food as their gut is not well adapted to digesting it. Unfortunately, as well as many green food sources (lettuce, spinach, cucumber, green tablets etc) certain other aquarium plants fit the menu of our “Golden Nuggets” perfectly - especially the Amazon Sword plant which is well known as a favourite pleco dish. You would be better to avoid such plants as Cryptocoryne spp., which in my experience does not go down so well with such catfish.

In contrast to the “carnivores” of the pleco world which have become very well known nowadays Scobinancistrus, Leporacanthicus or Pseudacanthicus, such highly specialized biofilm eaters as the Baryancistrus species repay incorrect nutrition and bad care conditions with a complete stagnation of growth. Often, even after years of care they do not grow any longer than about 8-12 cm. At roughly 15cm fish, those fish that have been looked after in the aquarium for years can already be sexually mature. This can be clearly recognised by the increased growth of the odontodes. The breeding of Baryancistrus species under suitable conditions is eminently possible. The biggest chance of success in breeding gold nuggets is in soft, slightly acidic water. You should make a few large caves available for the cave breeders, which you can prepare yourself out of clay or slate or you can order from a pottery. These holes should be exactly made fit the breeders (ideally length = total length of the fish + 3 cm, width = body width + half the length of the pectoral fin, height = body height + half the length of the dorsal fin). The most sensible thing would be to make the holes closed at the back and sides with the opening at the front which you would set up at the front of the tank so that it is possible to see what is going on in the cave with the help of a torch without disturbing the fish. If there are suitable spawning caves available and the water quality, temperature and water chemistry are all right and there are well nourished, sexually mature specimens of both sexes then probably the only thing missing for success is the right trigger. From experience with these Loricarids an increase in the speed of water flow by bringing in an extra pump as well as frequent water changes with the water a few degrees cooler can act as a trigger. In any case it’s worth a try.

With this report my aim was to contribute to the knowledge of the way of life and the demands of these pretty catfish. Basically, I was afraid that through ignorance many of these fish are being kept in the wrong conditions and so they are dying. “Golden Nuggets” because of their demands are certainly only suitable for very few community tanks. If you can get the environmental conditions right for these fish there is a whole range of fish more or less regularly available in the trade which can be kept with them without any problem. When you take this into account you could have a great deal of joy from your yellow seamed catfish for a long time to come.