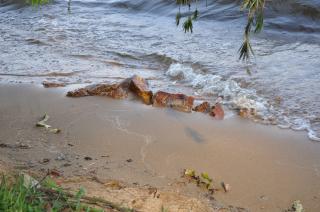 Close of Nabugabo bank. Note the coloration of the sand and local stone 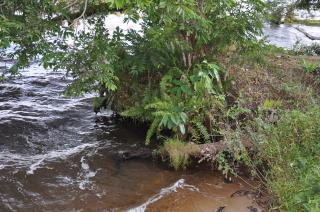 We are two weeks in Uganda and still waiting for our household goods to arrive. Everything we own, save for the contents of a couple of suitcases is somewhere on the Indian ocean making the trek from Durban to Mombasa so it can be trucked across Kenya to Uganda. We are bored, and worse, our three year old is bored. Someone suggests we head down to Lake Nabugabo for the upcoming three day weekend to get away. I am told it is a pretty place and you can rent a little cabin on the water. Better yet, the lake is bilharzia free.

I immediately start doing some internet research and find that Lake Nabugabo has been well sampled and studied. I even come across a complete species listing that confirms the presence of S. afrofischeri as well as some non-catfishes I find particularly interesting.

Ok, so I am going collecting. I have not so much as a single dip net to my name and no place to house anything I catch. Why should this stop me? By luck, my gardener shows me where there is an old pond on the grounds that had been filled in with dirt years ago. A little digging and a bag of cement later I have a nice little 75 gallon pond. Issue one solved. My ever supportive wife points out that there is an old mosquito net in the guest house. After looking the netting over I am doubtful it will hold up, but it is all I have.

I send the gardener to the hardware store with a parts list to construct a one meter by one meter push net: four one meter lengths of PVC pipe and four PVC corners. A little super glue and I have a frame. Now the tough part. I set the frame on four dining room chairs and start attaching the netting. I bring the net around the PVC and start to “sew” it on with fishing line. This process takes hours, but is helped along by a continuous supply of Uganda’s Bell Lager beer. The label tells me it has been “brewed by experts on the shores of Lake Victoria since 1950.” Several lagers later I have a sad looking, but functional net. I am doubtful that the mosquito netting will hold up for long. 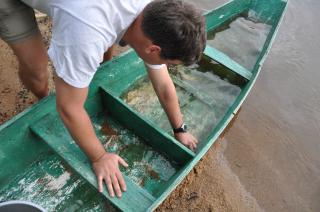 Sorting the catch from the kid's canoe

We arrive at Lake Nabugabo after having crossed the equator during the three hour drive. The lake is beautiful, and after settling in, I hit it with my push net. I collect on the beaches, among driftwood snags, in stands of water grasses and reeds, and after an hour in the equatorial sun I collect exactly one tiny cichlid fry. Luckily, I knew what to do. I found two people: a local fisherman and a 12 year old boy. The fisherman jumped in my truck with me and we were off to the Jebu river, which feeds the lake. The 12 year old told me that “nkolongo” (Synodontis) were best collected at night and said he would bring me some in the morning from his “trap.”

The Jebu river is actually more of a slow moving papyrus choked swamp than a proper river. The fisherman takes me to a small clearing in the papyrus and I take a tentative swipe with my push net. It comes up full of wiggling barbs! Excited, I get in about thigh deep and take another pull. This time I am rewarded with dozens more barbs and a beautiful pair of Ctenopoma muriei.

Ok, now I am collecting! I line myself up for a third pull, take a step forward, and the accumulated plants stocks and other bottom detritus gives way. I am in a sense falling. I reactively push the net down for support. It stops me from sinking deeper, and three of the four PVC corners shatter under my weight. I realize I am done collecting after two pulls. I also realize that I am sunburned, my arms ache, and I am neck deep in a central African swamp. I think that this might be a good time to call it quits anyway. I laugh to myself that I thought the mosquito netting would not hold up.

Early the next morning I take a walk by the lake and see the 12 year old boy. He is getting in his canoe to check his traps for me. As he paddles into the rising sun I wish him luck. He returns about an hour later and realize with some shock that his “trap” was a small two meter section of gill net that he had strung up in the hippo grass (Vossia cuspidata). I know that anything caught in the gill net for more than a couple of hours will probably be nearly dead. We sort the catch and it contains two S. afrofischeri, one unknown Synodontis and several Haplochromines. I throw back anything looking really beaten up and am left with several cichlids and the three synos. These are packed with my catch from the river in a large, lidded plastic tub for the three hour drive home. 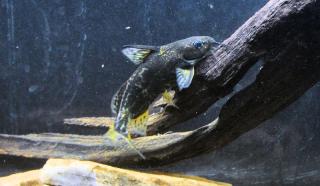 All fishes made it home but the haplochromines and the unidentified syno all die over the next three days. They may have made it if I had established tanks set up and various treatments on hand, but I had none of these things. Then again they may not have survived as gill netting is about the most “violent” method of catching fishes since they may be trapped in the net for up to 12 hours before being recovered.
A week later my fishroom arrived. The river fishes were placed in a 40 gallon and the two S. afrofischeri in a 45 gallon. All have settled in well. The two synos, just three weeks later, are out eating Tetra flake food even with the aquarium lights on. Their various wounds are all healed up and they are both mine and the gardener’s, favorite two fish to watch.

Biotope Notes: Lake Nagugabo proper is warm, I did not take measurements, but the temperature was in the upper 70s F. The heavily shaded Jebu river was much cooler, with a temperature in the low 70s. The lake is not black water, but due to all the plant detritus in its feeder river, the Jebu, it has the color of watered down tea or very weak coffee. The lake is bordered on three sides by Lwamunda swamp and also takes some drainage from the swamp during heavy rainfall. The water is very soft. Most plants in the lake and swamp grow emersed, but the lake also has many large stands of Nymphea lotus. 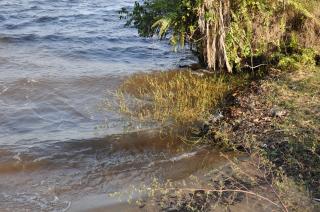 Small stand of submersed reeds on the shore 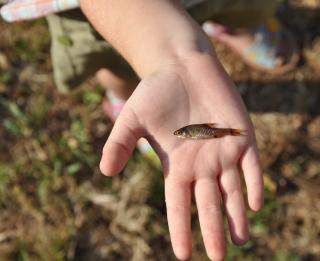 My daughter shows one of the barb spp. captured in the river Jebu