Introduction
How do we know what the different groups of plecos eat? The short answer is that, with a species that is new to us, we do not know for sure. But we can have a good guess, based on a variety of sources, but they all have some problems. Here we will take a look a the different sources of information, and then discuss what is the possible sources of error with these.

Techniques for identifying what a pleco eats
First of all, we have the aquarist's experience. We all (should) observe our fishes, and we see what the fish likes to eat. There are a couple of problem points here: First, what the fish really likes and what it should eat are not the same thing. All parents know that children will often eat sweets and "rubbish" food much more than they will eat "good" vegetables and meat. This of course does not mean that children will do well eating sweets. Likewise, a vegetarian fish may well feed in a frenzy on a meaty food. It doesn't make it the right food over a longer period of time. Like sweets for a child, these foods should be considered a treat or snack.

On the other end of the scale, we have starved fish feeding in desperation. I'm sure we have all been in a situation where we do not fancy a particular meal, but we eat it anyway, because it's essentially the only thing on offer. A normally carnivore fish may well eat vegetarian food with some enthusiasm if it's hungry enough. 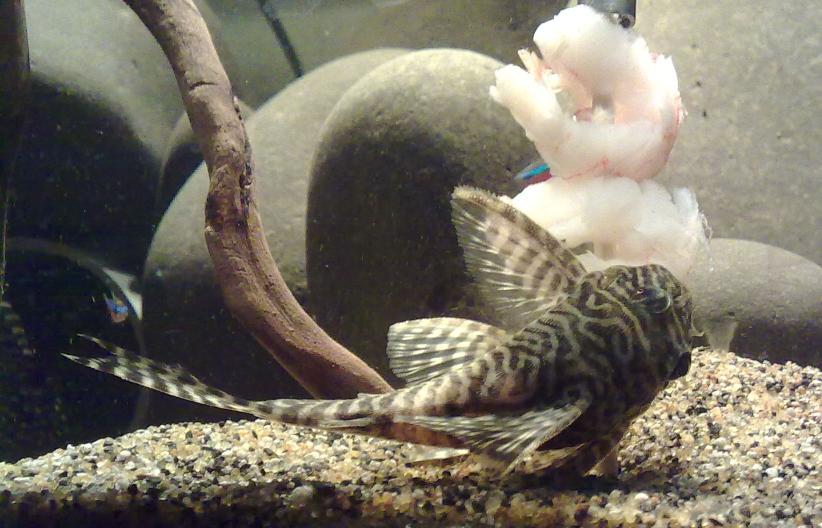 So, whilst the aquarist has the ability to observe the foods that the fish will eat, it is not necessarily an accurate way to determine the correct dietary needs of a particular species.

Second, we have field observation. Observing the fish in the wild is in some ways a very good way to determine what the fish eats naturally. However, it's got quite a few problems. The main problem is time - the observer would probably have to spend months if not years studying the same species throughout the change of seasons. That's not the only problem. The water levels in for example the Amazon region in South America will vary so much that when it's dry, the fish is not very difficult to find, but in the rainy season, vast areas are flooded, and the fish spreads out over a much larger area. This makes it much harder to follow the fish - and it allows the fish to eat completely different things, as the area available for finding food on is much larger, and items that were previously well above water level are now under the water and thus available to the fish. So whilst it's not too difficult to observe the fish in the dry season, it is far from the whole story, and the wet season is when the fish really has a good choice of different foods. So, again, we may not get the full picture, unless a whole lot of effort is put into the study.

Thirdly, we have "post-mortem gut analysis". This means taking the gut content of fish collected for scientific studies, and analysing what it consists of. One would think that this is a near perfect method, but there are problems here too. First of all, almost all collection is done in the dry season when the fish are easy to get - but this is also the season of less food available, so the gut content of the fish may well be more of "it's all they had" than "this is what I'd choose to eat" choices. A second problem is that it's a snapshot. Sure, if we analyse enough different fishes gut content, we get a fuller picture than if we analyse just one. But most often, the fish are caught together in one or only a few locations. Again, this reduces the amount of variation that we get. A third problem is that for nearly all plecos, the food doesn't stay in the gut for very long - some studies have shown that "entry to exit" time can be as little as 40 minutes. We also know that many of these fishes are almost continuously grazing (at least during the active period, usually the night), and there is some evidence to suggest that they vary their diet depending on what they need at the moment.

A fourth method is analysing based on body features, such as teeth and gut shape and size. For a basic understanding of the dietary needs of the fish, this works well - a long gut indicates a largely vegetarian diet, where a shorter gut indicates a meatier diet. Teeth tell part of the story as well. Many, fairly blunt, teeth are used for scraping against a surface, to scrape away at the biofilm layer of all or specialised submerged surfaces. Fewer sharp teeth indicate more of a biting or chopping purpose, and chisel shaped teeth are found in wood-eating fish. The problem here is to find the data - particularly for fish with poor scientific data, such as those that haven't been scientifically described or were described a long time ago. In particular, finding the gut length of the fish is impossible without also killing the fish.

Obviously, if we combine several of these sources of information, we may get a more complete picture. The table in this document is meant to be a summary of the best available knowledge on what type of food to feed to each genus of loricariid. It is very likely, as we find more evidence, some of the information listed below will change. It is offered as a guideline and in some genera, the variation in diet can be quite large, so do not take the table below as a "this is guaranteed". Read up on what the species information for the particular species you are keeping or want to keep and see what other literature says.

It should also be noted that when conditioning for breeding, there is a benefit in feeding a slightly more meaty food to otherwise vegetarian fish. This needs to be done in moderation and with a good mix of vegetable fibre mixed into the food. And as always, the key to good feeding is, like for humans, a variety of good food - one thing on it's own will not make a good diet, whether in itself it's good or bad. A few "bad" things won't ruin the entire diet either, so giving the fish a little treat now and again is fine.

Combining fish with different diet
A subject that quite often comes up on PlanetCatfish (and other forms of discussion) is the wisdom (or otherwise) of mixing fish of different species in the same tank. This is complex subject that would take much more writing than most people expected to read this article would like to read. I will however cover this from two simple aspects. First of all the food aspect itself. If the fish are not closely related, it's likely that they have different diets. If this is the case, it can sometimes be difficult to ensure that the respective species gets the right diet. A carnivorous fish housed with a vegetarian may for example lead to the vegetarian stealing some of the meaty food, and the carnivore ending up with insufficient food - eating more meaty food will just make matters worse for the vegetarian.

The other aspect is very important, but not at all to do with food or diet: It's about housing closely related species (same genus) in the same tank. If the two species do not naturally occur in the same area, it is likely that they can cross-breed, which will lead to hybridisation, where one species breeds with another species. It is universally accepted that we do not want hybrids to spread in the hobby.

The table
This is what you came here for, right? The diet of each genus is listed below. The diets are defined as: