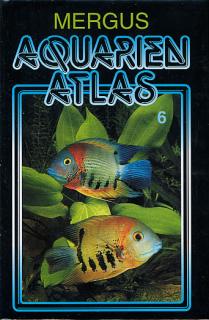 Another Atlas in the series & another German language only book – English translation seems to have come to a halt at Vol 3., though despite being unable to speak German this should be no deterrent to the compulsive Mergus Atlas buyer as Jools showed in his Wels Atlas review. Instead of a review I want to show (justify) why I like these books so much:

You get a lot of book for your Euros - 1232 pages with over 800 fish and 20 plants described - 258 pages on Catfish alone. But the real beauty for me is the vast quantity of detail and its erratic format of presentation only partially diminished by being unable to read German. For a random tour of the books appeal:

Updates and name changes of species presented in previous volumes occur throughout the book e.g. Hyphessobrycon Colombians and some Rasbora are now Trigonostigma . Tiger Barbs changefrom Barbus tetrazona to Puntius tetrazona - which is contrasted via two excellent photos with Puntius anchisporus - the latter having red on its fins the former black - and if that isn't easy enough: midline scales 19-23 vs 22-24 and the "Schuppenanzahl um den Schwanzsteil" of 14 v 12. A quick check at the LFS showed lots of red finned Tiger Barbs - does this mean we've been buying Puntius anchisporus all along - anyone volunteering to count the Schuppenanzahl?

The same applies for catfishes. Megalechis personata and Megalechis thoracata in side-by-side photographs - easy to distinguish. Compare this detail to that of Hara horai - Hara hara's slightly bigger cousin and from what I can make out the German text only states that it is very difficult to distinguish between them, the photo offers very few clues either. Varieties of popular fish appear e.g. Corydoras aeneus and Paracheirodon.

The vast detail on some unusual fish types is incredible: 38 pages and 56 photos of various Pelvicachromis sp. aff and "Varieteis II" etc.

There are curious omissions - Otocinclus "zebra" has yet to appear - no entry for Pseudocanthicus sp 'Titanic' yet a picture of one with correct id appears on the book jacket.

Catfish coverage is good, for example 29 C-numbers in the range C35 - C71. The Loricariidae terminology is up to date with Isbrücker's latest revision so there are Ancistomus, Panaqolus, Hemiloricaria, Lampiella etc. Again bizarrely Panaqolus maccus has yet to appear (except as a photo for Peckoltia vittata in Vol 1), yet an insert picture shows such a fish resting on a Corydoras labelled as Panaque maccus. As usual the coverage is across all the families, rather than any in great depth. Some snapshot enties:

The first picture I've seen of Ancistrus cirrhosus. All 4 Leporacanthicus species galaxias, heterodon, joselimai, & triactis. Megalancistrus barrae, a poor dry looking specimen that appears to be resting on a rock in a stone quarry. Liosomadoras morrowi, Fowler 1940 a smaller dark grey version of Liosomadoras oncinus with the note that Burgess considers L. morrowi a synonym, and at last placing the fish in Auchenipteridae instead of Doradidae. A recommendation that Brachyplatystoma filamentosum is not an aquarium fish - but should you wish to try, the recommended aquarium length is given - in this case a whopping 500m at 22 to 30C!

There is a whole new section on Crabs, Shrimps, Lobsters and Crayfish, including 13 photos of Caridina japonica & Caridina sp.

The photos, as in the rest of the series are generally excellent, my favourite though has to be of the plant Otelia ulviflora taken by Baensch himself of a snail eaten cyanobacteria covered specimen that would look at home in my tank!