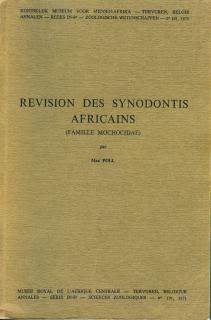 There is a bible for almost every genre of catfish keeping (OK, seeing that none exists for my favorite group - Asian catfishes - I am stretching the truth a little), with some groups garnering more attention (loricariids and corydoradines come to mind, with the numerous offerings from Eugen Ulmer, Aqualog and Mergus). Where does this leave the dedicated Synodontis fan? This tome (almost 500 pages) with the nondescript brown cover, which should rightly be considered the Synodontis bible.

Although this is primarily a scientific work, it has plenty of useful information including maximum sizes (with the caveat that this information is based on museum collections), distribution maps, key diagnostic information for each species, and most importantly, illustrations of all the species treated.The plates at the end of the book include photographs of humeral processes of each species (an important identification feature for Synodontis).

However, this monograph was published in 1971 and is beginning to show its age. Despite its age and the linguistic hurdle for some (the work is written in French), this is still an invaluable work for identifying Synodontis species. How useful is it? The book has been the success story more than once when it comes to answering "what is my syno?" posts in the forums.