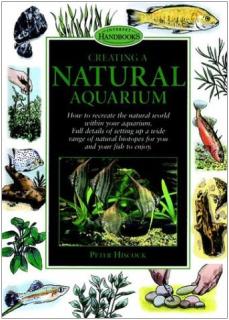 As a fan of "natural" aquaria, I can not pass up any book on the subject. While Hiscock's book may not be the definitive guide, it is a good introduction. The book starts with three general chapters: The Path of a River, Making a Biotope Aquarium, and Aquascaping. The author then lays out 12 distinct natural aquarium themes. He uses the term biotope to describe the set ups, but states up front that his purpose is not to "reproduce" exact habitats, but rather "represent" them. These are really "theme" aquaria, but that is what most aquarists are really after anyway. Each set up covered includes photographs of the materials used, recommended fishes, and the completed aquarium. Purists will certainly be put off some of the author's liberties, such as Java Fern, crypts, and Amazon swords to aquascape an Australian River, but keep the author's stated goal in mind.

The author does make some décor choices in a few of the set ups that I did not particularly care for. He combines, in the Central American River set up for example, rounded stones on the substrate, with angular, sharp stones against the tank's rear pane. Rounded, worn stones are great for a river substrate and angular stones can be used to represent an eroding riverbank. Used together, they contrast greatly and the end product does not look like any Central American River I have collected in. He also does not experiment with backgrounds. All tanks in the book have a simple black background.

A few of the set ups deserve special mention. The Mangrove Swamp set up is original and attractive. The Darkened cave is a habitat rarely covered and the European River design would make a great display tank.

While not the last word on the topic, Hiscock's book is a good introduction for any aquarist thinking about the next step after pink gravel and a bubbling scuba diver.