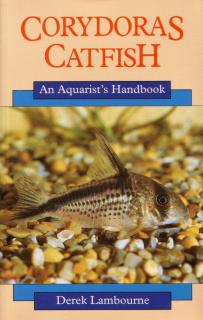 Corydoras books come in all shapes and sizes: this one describes itself pretty much accurately - it's a cory-spotters handbook.

Within can be found brief yet concise introductory, background and tertiary informative chapters followed by the nigh on mandatory species by species section. 131 species and sub-species are included, in varying detail (there isn't a lot you can write about a fossil catfishes water requirements) with an additional mention of 4 recently described (1993) species.

The information is accurate, sometimes a little dry, but always useful and to the point. Linguists will greatly enjoy the rarely seen Etymology feature which explains the meaning of each species' scientific (Latin) name. The book also features beautifully rendered line drawings of the fry development of certain species. This can be key in differentiating similar Corydoras, particularly those who have a question mark hanging over the validity of the species in question. Original photographs appear throughout and are handy for in-store / show cory ID "discussions".

All in all, hands up, so its another Cory book, but it's the best one at the price.