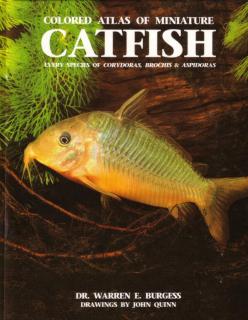 A lengthy and informative introduction proceeds a species by species account of every (described before '92) species of Corydoras, Brochis & Aspidoras. Each species has at least a page of useful text quite often including detailed breeding info again pre '92. There is also a superb quick reference pictorial index at the back for handy "in-store" Cory-spotting.

Many of the photographs are old and, this being a TFH publication, very familiar. They are however all good quality and this quality extends to the drawings which are used to show species that photographs are unavailable for. A quick bit of arithmetic tells me that out of the 135 species covered, 54 (40%) are drawings. Not so good. I'm also unsure why this book doesn't cover the entire armoured catfish family. Admittedly the title would then be even more inaccurate than the rather presumptuous "miniature catfish", but surely it wouldn't be too much to ask.

Niggles aside, the colored atlas of miniature catfish is a solid Corydoras book even though it is now somewhat dated. If you are really serious about Corydoras then you'll have this book.