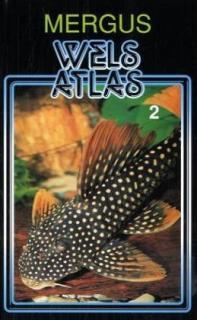 Wels Atlas 2 has a stunning 1360 pages. Together with Wels Atlas 1 there are 2304(*) pages on Loricariidae or to be precise 2220 pages, for part 1 also covers the Cetopsidae, Nematogeneidae and Trichomycteridae. There are no other families to be found in part 2. Also the section on husbandry is not included, so it is wise to own both books in order to be complete. Wels Atlas 1 has been translated into English in 2005; the translation of part 2 is scheduled for the end of 2008.

Again the authors have made a wonderful piece of reference which covers the subfamilies Ancistrinae(**), Hypostominae, Lithogeneinae and Neoplecostominae. Putting aside the nomenclature issue, the loricariid fan will find loads of information and 1,200 plus pictures and drawings, almost all of them in full colour.

The format follows the Mergus series (including Wels Atlas 1), which means that an individual species has at least one picture and a text part. It differs however in the facts that every new genus starts off with a boxed species list and a general introduction and also that a species in the Wels Atlas series may easily have more than one page. The Ancistrinae/Hypostominae part takes the bulk: pages 9 - 1218. Amazing! When browsing through the book it's easily understood why so many people are enthusiastic about the catfish family that some 30 years ago only seemed to exist of "Plecostomus hypostomus" and "Loricaria parva". It has indeed become quite an abundance of species.

Also one may understand better how difficult it is to correctly identify a fish when its origin is unknown for there are quite some look-a-likes. Of course the book has an L and LDA numbers list and a bibliography. In my opinion everyone with an interest in Loricariidae should own this part as well as part 1. Although the price may seem high, the books are worth every penny one has to pay for them. In short: highly recommended. If I had to make one observation, it would be about the name. Wels Atlas is a bit misguiding. Despite the fact that Wels Atlas 1 also covers 3 other catfish families, a name like Loricariidae Atlas would have been better. I for one expected more families when part 1 was published, so I was a little disappointed at first. Come on guys, publish Wels Atlas 3 and please include the Auchenipteridae!

(*) I own the second, expanded edition of Wels Atlas 1, which has 944 pages instead of the 860 pages of the first edition.

(**) Although specifically mentioned on the back cover, in the book the subfamily Ancistrinae is regarded as a tribe that sits under Hypostominae (Armbruster, 2004). So either it's a mistake not to correct the back cover or it was left there on purpose for commercial reasons (as the Ancistrinae are very popular).