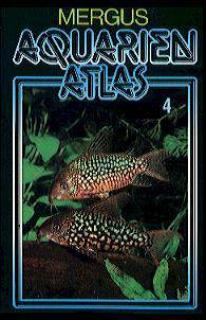 Generally the book follows the familiar format of the series, dealing with each family and group of fishes in systematic order. There is one difference in this volume, there is now one index, which holds both synonyms as well as scientific names.

The catfish part is from page 223 up to and including page 339 with 14 families. However, a lot of them (270 - 309) deal with Loricarids. No wonder, because in those days L-numbers were being discovered one after another more quickly than I could drink a cup of coffee. Also the Corydoras get a lot of exposure (pages 236 - 261) too. The other families may divide the rest of the pages, which says it all as far as I am concerned. Despite the fact that the Mergus site states that "the emphasis in volume 4 is on catfish (and cichlids)", I don't agree. This is certainly not the best volume in the series with regard to catfish generally, but l-number fans will be appeased. Overall, I think very highly of the Mergus series and together the six parts form a brilliant piece of work and reference.