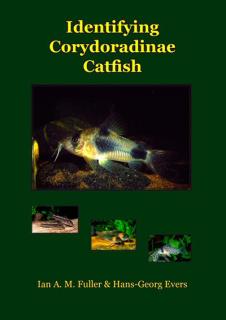 Catfish keeping aquarists have had it good of late; the rate of publication of books in the subject area has never been higher and shows no sign of slowing. However, there have always been "Corydoras" books and both authors of this new aid to the identification of this group of species have previously had their hand in adding to that opus.

The book itself is initially different in its title; as suggested it covers the subfamily Corydoradinae; a construct that aquarists will be getting more familiar with if, as I suspect, the fragmentation of the super-genus Corydoras remains in vogue.

The book itself is 384 pages wide and roughly A5 in size; it fits well in the hand, something I particularly like in an identification book. Picking it up, physically moving through it from here to there is easy; an important point for an ID book that is unlikely to be read from cover to cover; rather dipped into as necessary. Colour photos appear throughout and indeed, excluding the introductory and reference pages, only a dozen or so pages lack at least one photo.

After the perfunctory introductions and so forth, the book systematically details all species of Aspidoras, the "still with us for now" Brochis, Corydoras and the newly resurrected Scleromystax genera, then marches though the ranks of c-numbers (cross referencing those that have been identified to species back to the described species section) finishing off with a mainly pictorial half dozen pages of undescribed and unnumbered Corydoras. Time will yield more precision, but, all-in-all, that's got to be upwards of 350 species of catfish.

The species by species pages discuss distribution, explain etymology and give details of attainable size. Most species also carry extra remarks mostly dealing with identification issues concerning species of similar appearance or gender issues. Only on a handful of occasions do pages lack illustration; good images of preserved material are used for those species that haven't been seen in the hobby but mostly each species has at least one picture of an aquarium resident, often more than one if that helps with a particular point surrounding identification.

In the c-number section, C001 to C145 are featured with reduced text covering distribution, size and the occasional footnote, those c-numbers that have been identified to or, are described as, species are cross referenced to that species. This is then rounded off by the aforementioned "we have no idea what these are" section and the obligatory references. Generally the text is informative, brief and insightful throughout.

So what? It's clear that this joint effort from Ian Fuller and Hans-Georg Evers benefits from, if I can be crass with national stereotypes, dogged determination and confident precision respectively. This is the most complete book in its class, it has, as its prime benefit, the combination of knowledge from a deep pool of international knowledge and experience. It's the broadest yet treatment of the group in the English language and, at time of publication, the most up-to-date. To me this is the right cocktail of pretty picture book and serious journalism but it does assume a lot of prior knowledge. The reproduction and advanced care of species, for example, isn't covered, but there are books out there to deal with that and much of it is generic information anyhow. I've got a thing about maps too; I think that's about all I would really have liked to have seen for each described species - when dealing with species identification within large genera, so much depends on where species are from it's perhaps a surprising omission. Maybe a quick yes or no on whether the species had been captive bred would have also been useful.

Certainly if you're a specialist or in the trade you'll want this book. If you're keeping a few species of Corydoras, want to branch out, or just want to check out the latest arrivals in your LFS, this book is your next step.