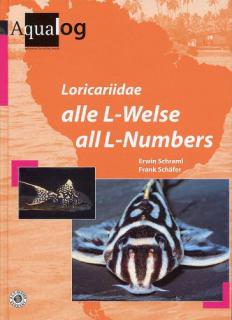 Aqualog has published the 2nd edition of its famous "All L Numbers" book. This 2nd edition covers L 1- 350 and LDA 1 - 76 (the 1st edition covered L 1 -202 and LDA 1 - 25 not including the later issued stickers). Most of the L Numbers are illustrated in one, or more, clear photographs. However, Aqualog was not able to secure photographs of all the fish and some are illustrated in black and white drawings. Under each photograph is the L Number, suspected genus, provenience information, estimated maximum size, and a series of symbols like those used in the first edition. Each symbol reflects a generality about aquarium care such as temperature, pH, lighting, etc. Strangely, keys for the symbols appear in the front of the book in German, French, Russian, Dutch, and Spanish but not English. There are also a number of described and identified loricariids illustrated throughout the book.

Many of the mistakes contained in the 1st edition are rectified. For example L 32a is no longer an African catfish. In fact there is no longer an L 32a. The book also still suffers, though to a lesser degree, from many of the same issues that plagued the 1st edition. The problem Aqualog has is that they are not always able to obtain original photographs of the L Numbers that were published in DATZ. This often leaves Aqualog in the position of having to use photographs that "look like" the original L Number, but are not always the same fish. For example, one of the photographs of L 187 is actually L 187 (Chaetostoma pearsei), but the other two photographs of L 187 are of two different species. The provenience information has fewer inaccuracies than the 1st edition but still some significant errors. The same fish (L 187) is listed as coming from the upper Orinoco in Venezuela/Colombia when this species is actually restricted to the Rio Tuy basin of north central Venezuela. Thankfully, the 2nd edition also retired the Aqualog invented "L Numbers" with a letter modifier (e.g. L 27a, L 27b, L 27c).

Perhaps the most exciting part of the book is the "Annotated Checklist" that appears in the front of the book. This section provides a little bit of additional information on each L and LDA number and is very useful. Unfortunately this useful information is not included with the actual species profiles and was published in a very, very small font that makes it difficult to read. This leaves the reader constantly trying to hold a place in the book while flipping to the front to find additional information on an L Number. The Annotated Checklist is in both German and English.

Aqualog, like DATZ, also choose the follow the "DATZ Thirteen" genera despite the fact that some of these genera were invalidated by the scientific community before the Aqualog book was published. This taxonmical tug-of-war will not have a great impact on the majority of users of this book who will enjoy leafing through page after page of great l-number pictures.