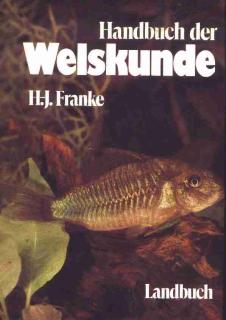 Two years after David Sands started his well known series and four years before Burgess, there suddenly was a German book completely dedicated to catfish. It was called Handbuch der Welskunde (Handbook of catfishes), written by H-J Franke from the German Democratic Republic and published in 1985. And, contrary to the books by Sands, this one was affordable. What did you get for those 12 pounds? Well, quite a lot, really.

The book has 335 pages, of which 71 are filled with colour pictures. Furthermore, there are sections on characteristics, anatomy, family overview and of course the major part is filled with descriptions of species from 25 families. There is some emphasis on the Loricariidae and Callichthyidae, but this is not overdone. The other families get a good coverage as well. Many black and white drawings give the book something special. It reminds me of the catfish section in Sterba's Freshwater fishes of the World.

This was my first major book on catfish and although it's rather outdated now (for example: Ageneiosidae is regarded as a separate family and many names are incorrect), I've benefited very much from it over the years. It's a precious thing to me.

I'm certain that this book is out of print, so people who are interested have to check the auction sites and/or the second hand bookshops now and again. There's just one edition, however, there are two (slightly) different covers. The book is only published in German, yet I can recommend it to everyone interested in catfish.