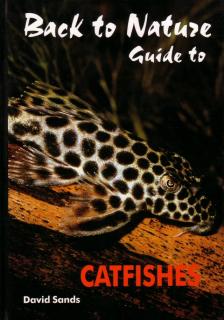 Dr. Sands is well known for his outstanding five volume "Catfishes of the World" series and his studies of Corydoras. My question about this book is, what happened? This "new" book is basically a reprint of Sands' "A Fishkeeper's Guide to African and Asian Catfishes" (1986:Tetra) and his "A Fishkeeper's Guide to South American Catfishes" (1988: Tetra). This book contains the same old information, and many of the same old pictures, already published in the two Tetra / Salamander books.

The book opens with a chapter entitled "Aquarium" which covers the nocturnal aquarium, aquascaping and water. There really is nothing in this section that is not included in every basic aquarium book. The only notable item in this section are the beautiful photos of South American landscapes. The entire book, as we might expect, has a strong leaning to the catfishes of South America.

The section on African and Asian catfishes covers a pitiful fourteen Asian catfishes and forty African catfishes (most of which are Synodontis). The complete lack of research in this section is glaring. Of the fourteen Asian species, Sands places them all in the family Bagridae despite that fact that there are six families represented. Sands also places numerous African families in Bagridae despite the fact that these fish were all assigned to new families nearly a decade before the Back to Nature Guide went to press. These problems make the book useless as an identification guide. Many, perhaps most, of the photographs in this section misidentify the pictured fish. For example, on page 101 the pictures are labeled:

The final section, with the curious title "Coldwater Catfishes" was obviously a last minute add on. The chapter is two pages long and does not cover any specific species. The other strange thing is that of all the catfishes that could have been included in this section, only the North American Ictalurids and the Asian Wels are discussed. The many temperate species of Russia, China, North India, and Japan are completely excluded from the chapter. Even this section did not escape the misidentification bug and a photograph of the yellow bullhead ( Ameiurus natalis) is labelled Pylodictis olivaris.

If you have Sands' two Tetra books there is no reason to buy this one and as such is not what I would call good value for the money.