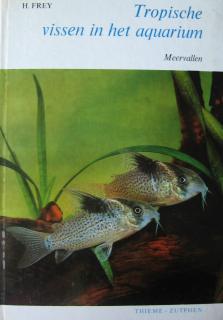 This 120 page hardback book, which was originally entitled, "Welse und andere Sonderlinge" (Catfishes and other oddballs) starts off with a rather unusual register. The species are not linked to pages, but to specific numbers. To give you an example: Acanthodoras spinosissimus is given the number 5, which can be found on page 31. Indeed, it is not the easiest way of indexing a book and that's probably why I've never seen it utilised anywhere else.

The catfishes part of this book - which in itself is part of a series on tropical aquarium fishes - goes from page 14 - 87. The pages 88 and onwards are dedicated to the oddballs, like Gymnotid eels, lung fishes, Mormyrids and so on. The pages 5 - 13 have the register and a glossary, in which scientific names and specific words are explained.

The catfish part is divided into two parts. The armoured catfishes are described on pages 20-54, and they contain three families, namely the Callichthyidae, Doradidae and Loricariidae. The naked catfishes of nine families are dealt with on pages 55-87. Names are, of course a, bit out dated, but still bring a smile to my face. How about Plecostomus plecostomus, Loricaria parva and - tucked away in the Doradidae under number 49 on page 54 - Trachycorestes striatulus. To be honest, the book indicates that the latter fish may also belong to the Auchenipteridae, which makes it the only member of this family in this publication.

The families each have an introduction. The species are dealt with in alphabetical order. Each has a drawing and a short description, which can be compared to those of the Mergus Aquarium Atlas. The book has 16 black & white photos, some plates with coloured drawings, many black & white drawings and distribution maps for each family.

In conclusion, this book is certainly worthwhile. However, buy it just for fun. Enjoy its strange systematics, its drawings and pictures. This book itself is truly an oddball amongst books on catfishes. The other oddballs it deals with can be considered as a bonus.