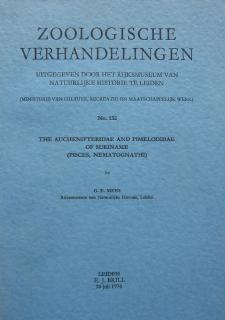 This one is surely not everyone's cup of tea. Its cover hardly attracts attention and it could therefore easily be overlooked. No colour pictures and loads of rather technical texts. Of course this is primarily a scientific work. It was Mees' intention to describe all Auchenipteridae and Pimelodidae of Suriname, but he had to let that idea go. In the Introduction he states:" So much information on extra-limital material was collected, that it seemed a pity not to use it". To make up for this, he has added a list of species that are known from Suriname. The reader is in bonus for he gets much more species than initially intended.

The book can be compared to that of Poll, Revision des Synodontis Africaines(Famille Mochocidae). It too has an enormous amount of information, like distribution maps, keys to the genera, illustrations of many species discussed and 15 black and white plates. With regard to colouration of the species one has to bear in mind that this information is based on museum collections. Included are several genus novum (new) and species novum.

The book starts off with an introduction, which also includes a zoogeography, bibliography, collecting localities and acknowledgements. The Auchenipteridae part covers pages 12 — 114, in which eleven genera are discussed and/orintroduced. The Pimelodidae part ranges from page 114 to 237 and covers 10 genera.

The pages 237 and onwards are dedicated to the above mentioned list of species known to occur in Suriname, new synonymy, a summary (in Dutch), references, a postscript, an index and the 15 plates.

To me this book is priceless. When I became interested in Auchenipterids in the 80's, there was very little material on this family. By chance I found the name of Mees and I decided to write him a letter. That resulted in a correspondence that lasted for some years. I could sometimes provide him with “material" — I worked at a wholesaler in those days and not every fish survived the trip from South-America to The Netherlands. Dr. Mees in turn provided me with information, among which this book. He didn't have a copy to spare, but he could arrange a nicely priced copy.

I once asked him if he had any fishes at home. He said "No, I have them all here in the museum. They sit in tiny jars. It's kind of a hobby, really. In fact I am an ornithologist". I thought that was pretty funny. What's in a name? Mees literally translates into English as titmouse.

In the beginning of the 90's I wanted something new and decided to stop keeping Auchenipterids, which also ended the correspondence and the use of the book. After some years of keeping other catfishes and Rift Lake cichlids, I renewed my interest in the woodcats and started to use the book again. Of course a lot of new books on the subject had been published and I had to learn many new names. Indeed, Mees' work is outdated with regard to nomenclature — the Auchenipteridae aren't the quietest family in that respect. Yet it is still very useful and worthwhile. To me this is more than a book. It's a part of my life.

Postscript: a few days ago I rang the museum (Naturalis, Leiden) where Dr. Mees used to work, for I wondered what had become of him. He retired in 1991 and lives in Australia. He's no longer into fishes, but still studies birds.