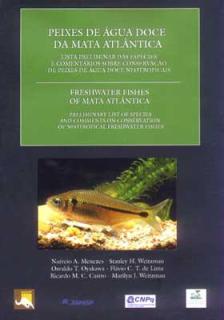 When one thinks of South American freshwater fishes, the first thing that comes to the minds of many is the Amazon River. The Amazon River is not the only river (although it is the most prominent) on the continent however, and the incredibly varied fish fauna of the smaller South American rivers tends to be overlooked. This book is a very commendable attempt to address this imbalance by looking at the freshwater fish fauna of the Atlantic Forests of Brazil.

The Atlantic Forests (Mata Atlântica in Portuguese) refers to many forest types, both subtropical and tropical, but one thing they have in common is their geography, being the forests that extend along the coastal region of Brazil (hence their name). This bilingual (English/Portuguese) work covers the Mata Atlântica in the strictest sense, i.e. covering a narrow coastal strip in southeastern Brazil, but even with this limited coverage, the ichthyological diversity in such a narrow strip of coastline is amazing. The book starts with a concise but thorough introduction to the history of exploration of the Mata Atlântica, as well as a section on the ecology of the fishes in this region. This is amply illustrated with photographs illustrating the kinds of the habitats that one may encounter in the Mata Atlântica. For the aquarist, this is probably one of the more important sections of the book, as the information provided may be valuable for recreating an Atlantic Forest biotope tank. The introduction closes with a discussion on the conservation of this fast-disappearing habitat.

The book then gives a species-by-species account of the fishes of the Mata Atlântica, illustrating each account with excellent colour photographs. This is easily my most favourite part of the book, with catfishes not being given short schrift here (about 150 of the slightly over 400 pages making up the book deal with catfishes). And what catfishes are featured — the book features probably for the first time in print live pictures of Neoplecostomus ribeirensis, Kronichthys lacerta, two species of Isbrueckerichthys (I. alipionis and I. epakmos), Chasmocranus lopezi, Trichomycterus zonatus and Listrura picinguabae. Although the information given for each species is scanty (as far as husbandry is concerned, since this book is more like a field guide than one aimed for aquarists), the stunning images alone are well worth the price of the book.

If you, like me, particularly enjoy reading fish books, then getting this book is a no brainer. The fact that this book covers and illustrates the freshwater fishes from a less well-known area of South America so well is just icing on the cake.