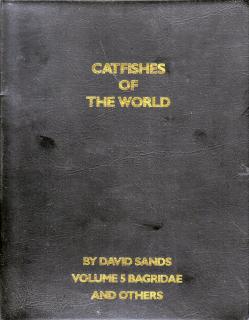 This final volume in Dr Sands' series begins with a chapter on the evolution and zoogeography of modern siluroids. Chapter four, "South American Families," covers Ariidae, Ageneiosidae, Cetopsidae, Diplomystidae, Helogeneidae, Hypophthalmidae, Astroblepidae, and Scoloplacidae. There are short paragraphs introducing each family. Following this section there is an interesting article by Sands on the Astroblepidae. Chapter five is entitled "African Families" and covers Clariidae, Plotosidae, Schilbeidae, Bagridae, Mochokidae, Amphilidae, and Malapteruridae. A few brief notes are then included for every family. One of the most interesting sections of the chapter is a reprint Foersch's article on spawning Phractura. Chapter six covers the Asian catfishes. Eleven families are covered in total although (as you may have noticed) some of these are now no longer valid. Also included in this chapter is a paper by Dr. David Price on the unique manner of fry rearing in Aorichthys. Chapter seven covers European, North American and saltwater catfishes. The final chapters cover feeding and nutrition, a glossary, and a bibliography.

This book was published in 1985, fifteen years ago, and is really starting to show its age. Much higher-level taxonomic work has taken place since this book was published and families in the book have disappeared and others have been erected. However, it is not fair to compare this book to other references as it is really more of a collector's item than a "working book." My only criticism of the series is the rather strange binding method. All five books were released in small three ring binders. This makes them difficult to store on a bookshelf and after fifteen years the pages start to fall out despite the best care. The original idea behind the binding was to issue updates that could be added over time. However, no updates were issued for volume five.

Volume five should be desired for the interesting articles, lavish scientific illustrations, and its use as a historical record of the catfish aspect of the aquarium hobby. Like the rest of the series, this book is a must have for the very serious catfish specialist. In 1989 TFH published Dr. Burgess' An Atlas of Freshwater and Marine Catfishes" and this book quickly became the catfish hobbyist's New Testament. However, Dr. Sands' "Catfishes of the World" still deserves its place of respect as the Five Books of the Old Testament.