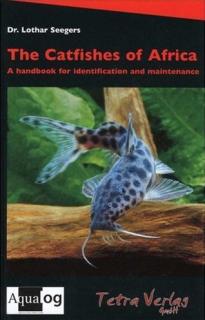 The announcement of this book caused a bit of a stir amongst catfish enthusiasts and it was eagerly anticipated; 600 plus pages covering African catfish, with 1,100 colour photos. This is supplemented with maps and black & white drawings. Eleven different families are covered including the popular genus Synodontis, but there is a wealth of less well known ones too. It is more expensive than a lot of books out there but, as in a lot of things, you get what you pay for.

There are brief but highly informative sections at the beginning of the book on African catfishes & then aquariums for them, before the book swiftly dives into the fish themselves. Family, sub-families, genus & species are all gone through for everything African — it is a definitive work.

Let me get my criticisms out first. Even I can tell that this book contains a few incorrect identifications, it appears to me, for example Lophiobagrus brevispinis & L. cyclurus are identified the wrong way round in the photos. Additionally, in some photos a second individual is superimposed into the photo which can be confusing in terms of what you are actually looking at and frustrating when considering size comparisons etc. Some of the photos of imported species show individuals that are atypical and also individuals in poor condition — see Synodontis pleurops. I think a trick has been missed here seeing as one of the books primary aims is identification — why not have photos of all known variants & photos of adult & juvenile patterns for those species more commonly imported? It is there for a few but not all. I also don’t like the way the information on a subject has the opening paragraph already started by the preceding bold title.

Finally, I found it a little disappointing that some of the identifications are questioned by the author and that some species are not soundly declared as hybrids, but all of these pale into insignificance compared with what the book really offers

What is just so good is that there are so many species covered, with details on identification and habitat and also feeding, maintenance & breeding where known. For example, how many people have seen a Chiloglanis species? This book covers over 40 different Chiloglanis species, plus the often confused Euchilichthys and the seldom encountered Atopochilus. Or what about electric cats? Lots of people have heard of them but did you know there are actually 16 different Malapterurus species & 3 smaller Paradoxoglanis, one of which seems to eat a substantial amount of plant matter?

I own quite a few books on aquarium fishes and this is one I’d hate to be without - I cannot recommend highly enough. It comfortably achieves its aim of identification & maintenance, so all credit to the author but the real downside is that of the fishes featured, too few are available to us in the hobby! I feel sure nothing will come along to surpass this work in a long time.

Are you interested in any of the African catfish families? If you answer ‘yes’ to this, then you should own this book if you don’t already!