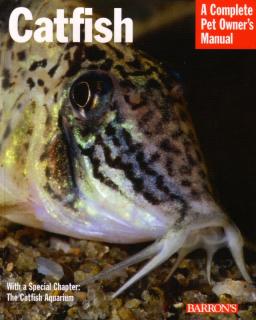 Catfish lovers, especially those starting out in the hobby, have long thirsted for a concise, informative work on maintaining a (predominantly) catfish aquarium. General aquarium books address some of the issues, but let’s face it, they don’t cover catfishes as much as we would like, and do not always adequately address catfish-specific issues. While there are already a number of catfish books published, they either tend to focus too much on loricariids/callichthyids, or just fall short of the mark.

Our prayers are at an end. The latest offering in the Barron’s series of aquarium fish books addresses many issues budding catfish aficionados will have and then some. The book is divided into six chapters: the first being a general introduction to catfishes, followed by a brief description of catfish distribution and habitats; chapter 3 is devoted to setting up and maintaining a catfish aquarium, chapter 4 with breeding catfishes, chapter 5 briefly describes some of the catfishes encountered in the aquarium trade.

The book is well organized and chock-full of useful information for the beginner catfish aquarist; scattered throughout the book are various dos and don'ts, such as a listing of catfish considered too large for the average home aquarium. I particularly enjoyed reading the sections on various habitat types in Chapter 2 (which is very useful information for those wishing to set up biotope tanks). Profusely illustrated with excellent colour photos, these alone are worth the (low) cost of the book.

The book has a decidedly South American slant (but then so do import lists) and contains less useful information for the advanced catfish hobbyist. The chapter on breeding catfish, for instance, covers only South American species, and those that are more easily bred at that. There are also a few typographical errors, mislabeled photographs (a picture of Belonoglanis is labeledPhractura for instance) and some arguably erroneous information again concerning a couple of the non-American species. These are minor points that would only be picked up by catfish experts and certainly do not detract from the overall value of the book.

An invaluable addition to the library of the catfish enthusiast, the low cost of the book is certainly an additional bonus. Purchase one for your library, or better still buy a few copies as gifts for your fish-minded friends. After all, to quote from the book: “Catfish keeping usually starts out as an afterthought. Quickly though, it develops into a joyful hobby”.