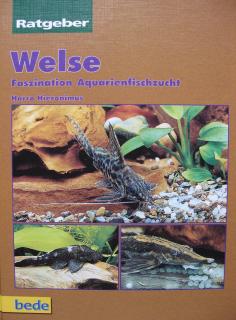 This 96 page hardcover book is clearly divided into two parts. The first part (pages 5 — 49) is about general subjects with regard to catfishes. An introduction, the proper tank, plants, water quality, diseases, food, an overview of catfish families, company, how they breed and how to get them in breeding shape are all separate chapters that lead the reader towards the most essential part of the book, which is breeding catfishes. To extend somewhat on the above: the overview chapter contains 32 families, which is quite a lot (although some are actually subfamilies) and the chapter on food is also rather impressive.

The chapter “How they breed” may need some explanation. The author explains the difference between egg scatterers, care takers (mouth brooding, nest guarding) and (semi-) live bearers. The latter refers to the Auchenipteridae. In the “How to get them in breeding shape” chapter (in German: die Zuchtkonditionierung) the reader is introduced to the Ian Fuller method, a name well known to this site.

The second part of the book (pp 50 — 95) is about breeding catfishes. There are descriptions of 37 species derived from 12 families. Most pages are dedicated to Loricariidae species (pp 71- 89), which was more or less to be expected. Several Corydoras are described as well. On the other hand, also species I had certainly not expected show up, such as Tatia galaxias, Mystus bimaculatus and Chaca chaca, to name just a few.

The pictures in this book look unfamiliar and fresh to me, which is a good thing when taking into consideration it’s not the first book on catfishes I’ve seen. Page layout is good too and there are no disturbing underscores, boxes or colours. It struck me though that a lot has changed in just nine years, for the nomenclature of some families and species is already outdated. And there are of course plain mistakes in captions and identifications (but that goes for almost every book I’ve seen so far).

The author’s approach has been quite refreshing. He has attempted to gather lots of information about breeding several species of catfishes from various sources and turned it into an extensive compilation. People who like automotive literature may be familiar with the Brooklands book series, in which every book covers one car (or motorbike) and contains loads of information derived from all kinds of contemporary magazines, thus making it a valuable source to people who cherish that particular car or bike. I get the impression Hieronimus tried to do the same and has succeeded in my opinion. He may be wrong now and again, but even if one or two species turn out to breed completely different from what he thought, expected or was told nine years ago, I think this book could be very worthwhile for people who intend to breed their catfishes.

As an aside: the reference page (96) shows a rather familiar web address: www.planetcatfish.com! Mind you, we’re talking 2000 here.