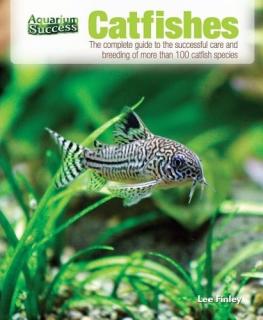 In the United States at the very least, the name Lee Finley has been synonymous with the catfish hobby for as long as there has been a catfish hobby. In fact, some would argue his monthly “catfish corner” column in Tropical Fish Hobbyist magazine has gotten more people interested in catfishes over the years than any other single author. Even across the Atlantic, the regular column was the inspiration for Planet’s very own “Catfish of the Month” spot; to carry on that idea of giving catfish fans a regular dose of what they fancy. So I was anticipating this book highly, like no other at least of the last few years and certainly wondered what would go in this review.

I sat down read the book, and wrote a review. I deleted that and a subsequent one too. Mostly because they read like rants. This text is not deserving of a rant, so what got me hitting the keyboard so vehemently? It’s to this I must turn to first. The author is a personal friend and the book is graciously part dedicated to this website. However, this website is what it is because we try to be open, honest and not self serving. So, let me have a paragraph of gripes.

Leaving the text of the book to one side for now, the layout of the book is at best jarring and it was this that I was getting hung up upon. Photographs are selected in good relation to the text but they are often cropped, many of them hideously so. 59 of the 106 photographs on or in this book do not show the entire fish. An alien landing on Earth reading this book would think many of these organisms lacked caudal fins. The back cover explains that the book contains "dozens of new or rare species". There's not a new species (in the sense of how long it's been available to the hobby) in the book but the point about rare species is well made and there are some gems featured.

I think the cosmetics rankle somewhat because the book is such a great read. The trend for books, especially reference books, these days is to be “webby”, to have pictures with codes associated with them and to have many species featured with smaller photographs. This book represents the best book-based original writing on catfishes at large since Carl Ferraris published his equally personal and knowledgeable “Catfish in the Aquarium” book. No mean feat. This then is another from that stable — it is not a reference book, it is a book for reading. For me, books are for reading and the web is for reference, the book appears to me to have this distinction perfect in prose and not so perfect in layout.

The first half of the 127 page soft cover handbook, is full of facts from all aspects of the catfish world. The author has distilled decades of soaking in catfish legend, fact and experience and decanted them into this book. It’s hard to pass a paragraph that doesn’t provide good advice, be it to a novice or a pro. I challenge anyone to read this and not find at least a golden nugget or three of information.

The second part of the book is a walk through the catfish families where we see at least some representation in commercial imports. Many species that don’t commonly feature in even in-depth books are covered and the authors enthusiasm for those species outside current fashion and out with the ordinary shines brightly and is probably the greatest factor in a very enjoyable read for the true catfish nut. Again, it's engagingly written with facts and insight in rich supply.

The author has been bold and right up to date with taxonomic usage. We see feminine Synodontis species, we see what most, for now, call Brochis being called Corydoras and the adoption of Panaqolus. This last one being used I think for the first time in the English language hobby literature. If ever there was a case of not judging a book by its cover, then it is this. Fans of all things catfish must buy this inexpensive book - it is well worth the admission fee. Those new to the scene but with an interest that runs beyond the Cory or the Pleco would also greatly enjoy this book and probably not be so visually affronted as this purist reviewer.