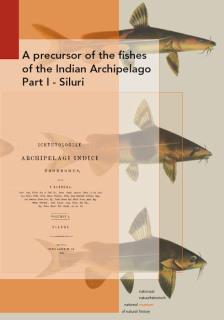 Although the Dutch ichthyologist Pieter Bleeker undoubtedly contributed more to the study of Indo-Pacific fishes than any scientist before or since, it is unfortunate to purveyors of the English language that so little of his works are thus published (almost all were published in French, Dutch or Latin). This makes it necessary to consult either the dictionary or your favorite translation software when reading his studies. Although much of what he wrote was pitched to scientists, Bleeker made observations of fish biology that have been obscured by the veil of language. A good case in point is this book.

Originally published in 1858, the first volume of the “Precursor of the Fishes of the (East) Indian Archipelago” dealt with the 99 species of catfishes known from the East Indies. This Precursor was intended to be a primer for his opus magnus, the lavishly illustrated “Atlas Ichthyologique”. As originally published, the diagnostic keys, genera and species descriptions for each species account were written in Latin, while the other portions of the work (e.g. distinguishing characters, data on species distribution, stomach contents, and fisheries) were written in Dutch.

After a 150-year hiatus, this seminal work on Southeast Asian catfishes is finally available in English, thanks to the efforts of the staff at the Naturalis Biodiversity Center. As an added bonus, the plates from the ”Atlas Ichthyologique” (among some of the finest lithograph illustrations of fishes ever published) that were originally intended to be used in the Precursor have also been included (albeit much reduced in size).

As a largely scientific work, there is not much information within this book that may appeal to aquarists. However, the Dutch accounts provide interesting information on the biology and fisheries of Indonesian catfishes, as well as providing some idea of their diversity and biomass before the large-scale destruction of rainforests (especially in Sumatra and Borneo).

Some of the translation in the book has not been handled well, leaving us with awkward-sounding sentences such as “The pattern of bars, although in general terms constantly similar, in the various specimens offers numerous gradations regarding the width, connection and extension of the bars” used to describe the color pattern of Bagroides melapterus. The Dutch common names for the catfishes have also been described literally, which leads to some very quaint sounding monikers (such as “high-finned liptooth fish” for Bagrichthys hypselopterus) that provide an archaic appeal (it would be interesting to see these names used in the Cat-eLog, though).

The best thing about this book is that it is available as a free download here, so even if you are not into heavily technical works, it is worth your while to download the book merely to admire the illustrations within.