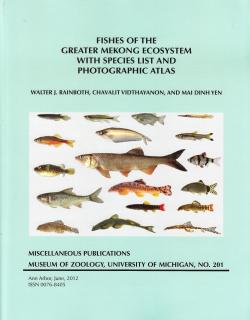 The book is comprised of five sections, with the second (the annotated checklist of fish species) and the fifth (the photographic atlas) being of greatest interest to aquarists. For the layman with an interest in this sort of thing, there is a detailed account of the geology and physical geography of the Mekong River drainage (as well as a brief overview of the problems of the taxonomy of the fishes found within).

More than 2,500 species are covered in this book, which appears to be far in excess of even the highest estimate (1,600) until one realizes that the authors meant for the book to not only cover the Mekong River drainage proper, but also the area by which the river exerts a significant effect on the biota. As this includes the discharge plume of the river that extends far into the South China Sea, species found in the coral reefs of the Gulf of Thailand and the South China Sea are also included in this work. For a book whose main purpose is to cover mostly freshwater fish species, this seems very odd. The number of fish species is also boosted by the inclusion of species not found in the Mekong River drainage but restricted to smaller adjacent rivers.

How useful is this book to aquarists? Well, unless you like to identify your fish by comparing them to tiny photographs, this would not be the Holy Grail you are seeking. The annotated checklist provides nothing more than the locality from which the illustrated fish originates (a brief description of the actual distribution of the species would have been more useful), and both species accounts and dichotomous keys are sorely lacking (although these are promised in an upcoming second installment). As previously mentioned, the photographs are too small to be meaningfully used for identification; bear in mind that to put 2,541 of them large enough to be useful in this regard would make for an elephantine volume.